Ethiopian Airlines announced today that it has resumed flight to Asmara, the capital city of Eritrea.

In its official Facebook the airlines posted: “We are pleased to announce the resumption of our flight to Asmara effective 23 June, 2021.”

The resumption of air link will further boost the overall political, economic, trade and people-to-people ties between the two sisterly countries.

Asmara is the capital and the largest city of Eritrea and is situated in Eritrea’s central Maekel Region.

It is home to the Eritrean National Museum and is known for its early 20th-century buildings, including the Art Deco Cinema Impero, one of the world’s finest examples of Art Déco style building, Cubist Africa Pension, eclectic Orthodox Cathedral and former Opera House, the futurist Fiat Tagliero Building, the neo-Romanesque Church of Our Lady of the Rosary,  neoclassical Governor’s Palace and much more. 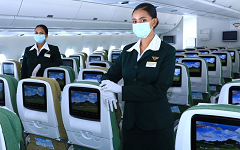