By Amb. Amina Mohamed – Agenda 2063 calls for an Africa where development is people-driven, unleashing the potential of its women and youth, while SDG 5 focuses on gender equality. How can we unleash the potential of Africa’s women and girls, given their widespread under-representation in so many aspects of African life?

The continued under-representation of women is Africa’s largest missed opportunity. Women and girls represent 50% of Africa’s population, and yet are continuously underrepresented in almost all aspects of private, public and civic life.

This leads to huge missed opportunities. In a number of countries, an estimated 10% of the Nations’ income is lost due to the uneven ‘playing field’ for women; in others, these losses rise to 27%.

Women’s leadership in politics, meanwhile, has been shown to encourage decisions that better reflect the needs of the people, while women’s inclusion in peace and security negotiations can lead to more stable and equitable outcomes.

To grasp the opportunity presented by women’s empowerment, we must broaden the space for women’s organisations to act. There are many pressing barriers to women’s empowerment in Africa, including lack of accountability for implementation of progressive policies, a lack of financial and non-financial resources available to women, oppressive social and cultural norms, and lack of gender-disaggregated data to inform intervention design.

Progress in addressing these challenges has been slow and difficult. Where progress has been made, women have often played a leading role. For example, a recent study spanning 40 years indicated that women’s organizations were the single most powerful tool in tackling violence against women.

In several countries domestic funding/resources available to support non-state players is shrinking in line with economies heavily dependent on commodities losing some steam. There is need to channel more resources to women’s organisations as well as develop their capacities to organise for women’s rights and engage across the board.

Women are some of the most forceful advocates for many of the ideas we want to see enacted in our societies, like equal pay and an end to forced labour. We can all benefit from the energy and sense of solidarity and social justice that our women bring.

It is shocking that, in 2016, we are still grappling with the widespread and systematic disempowerment of women and girls. This is not only a question of justice, but of common sense: at a time when we urgently need all that Africa has to offer, yet, are only using half of our collective potential. 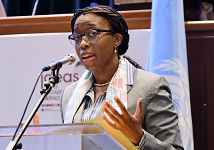 Over half COVID-19 patients in Ethiopia recover