Industrial development and value addition in the manufacturing sector in Africa has declined over the last eight years costing the continent $72 billion.

This is indicated by President of the African Development Bank (AfDB), Akinwumi Adesina, on Monday in Busan, Korea where he briefed journalists gathered to cover the upcoming 53rd meetings of the Bank.

“The share of manufacturing sector in Africa’s GDP has declined to probably about 10%. Africa also is deindustrializing. That means industrial value added is falling down. Between 2012 and 2018 Africa lost roughly $72 billion in terms of value added. That is not acceleration. That is deceleration. What Africa needs right now is turn around that trajectory,” he said.

The Bank’s annual meeting which is expected to open on Wednesday will focus on industrialization. The meeting aims to provide learning opportunities for African policy makers from the South Korea, which becomes one of the top global high-tech industry hubs of the world within a few decades.

The people of South Korea who have been in poverty like many African countries in the 1960s are now one of the high incomes people with per capita earnings of $26,000.

Currently Africa’s industrial GDP per capita it is estimated around $700 while the figure for Latin America and East Asia, which is around $2300 and $3,500, respectively, according to Mr. Adesina.

Low manufacturing capacity, productivity and infrastructure challenges are often mentioned as obstacles for hindering the development of manufacturing industries in Africa.

The annual meeting is expected to discuss how to address these challenges based on the experiences of industrialized economies such as South Korea.

Over 3,000 people including prime ministers, ministers of finance from all African countries, central bank governors and journalists from across the continent.

For the full message, you may check this video on youtube : 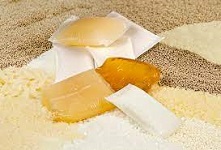