As compared to the previous year, the annual profit before tax of Zemen bank, one of the financial institutions in Ethiopia, has soured by 87 percent to 635 million birr (about $20 million at the current exchange rate) during the budget year ended June 30, 2019.

Zemen has generated a net profit of about 484 million birr (around $15.2 million), which is 78.5 percent up from the previous budget year.

It is the highest growth rate since 2010, according to the annual report of Zemen Bank, which held its annual meetings about a week ago.

During the year ended June 30, 2019 earnings per share of Zemen Bank reached 39.8 percent, which is 38 percent higher than that of the previous year.

The average annual earnings per share of Zemen for the past five years stood at 33.69 percent.

“The last five years average record of earnings per share performance shows that Zemen’s performance is above the private industry by 2.29 percentage point,” the annual report stated.

In relation to loan provision, the Bank has provided 49 percent more or 2.56 billion birr (about $80.5 million) during the year ended June 30, 2019 compared to the preceding year. During the year in review Zemen Bank has also generated $371 million foreign currencies, according to the report.

During the year in review the Bank has generated a total income of close to 1.6 billion birr (about $50.3 million), which is 39.5 percent more than the previous year.

The report shows that out of the total income 64 percent is generated from interest income while 28 percent and 18 percent came from trade service operations and foreign exchange gains, respectively.

Initially introduced as a single branch bank in 2008, Zemen Bank Share Company has introduced unique services to the banking industry of Ethiopia. These include include, delivery of cash to corporate customers at their location and collecting depositing with huge daily transactions as well as providing payroll service to many corporate clients. 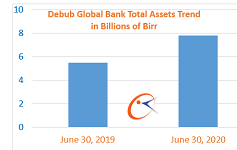