The report stated that investing in new off-grid and mini-grid technologies to extend energy access across Africa will be instrumental in helping smallholder farmers to meet rising food demand, according to a new report.

Achieving universal energy access with the help of mini and nano solutions is vital to meet rising food demand and transform rural lives in Africa, according to a panel of experts.

Currently, 840 million people* worldwide live without access to affordable, reliable and safe modern energy. Collectively, they spend about $27 billion each.

In Energized: Policy innovation to power the transformation of Africa’s agriculture and food system, experts from the Malabo Montpellier Panel highlighted opportunities for greater energy access to transform the livelihoods of the rural poor, reducing the drudgery of their work and generating higher incomes.

But achieving universal energy access will require a fourfold increase in investment to US$120 billion a year by 2040.

“Access to reliable, affordable and sustainable sources of energy to prepare land, plant, harvest, process, distribute and cook food, will ensure that Africa’s agricultural sector can respond to this demand, all within the context of climate change and increasingly scarce natural resources.”

The report made several recommendations to help Africa achieve widespread sustainable energy use that supports agricultural productivity. These included integrated policies for agriculture, energy and health, a cross-border framework for energy security, and investing in innovative, alternative solutions such as mini, micro and nano grids in additional to conventional sources of power.

The authors also highlighted how greater energy access would benefit African women in particular, allowing them to spend less time collecting fuel for cooking and heating, and benefitting from less pollution in their homes.

Around 600,000 people die every year in Africa from noxious fumes produced by cooking stoves and fuelwood – more than the annual global deaths caused by malaria. Meanwhile, women perform 90 per cent of the weeding on farms, spending up to 324 hours to weed one hectare of sorghum.

Overall, cooking accounts for more 70 per cent of household energy usage in Africa, compared with less than 10 per cent globally.

“Africa is the highest consumer of traditional solid biomass such as fuelwood, charcoal and farm residues, including animal dung, in the world,” said Joachim von Braun, co-chair of the Panel.

“For those cooking indoors in poorly ventilated spaces, this means daily exposure to noxious fumes and the burden of collecting fuelwood – falling heavily on women and girls. Improving Africa’s energy access, then, is also a public health issue.”

The Panel analysed six African countries that had made significant progress in connecting rural areas to energy sources in its latest report.

Among them was Ethiopia, where access to electricity doubled between 2010 and 2016, partly through the Climate Resilient Green Economy (CRGE) strategy launched in 2011.

In South Africa, the Cabinet approved the New Household Electrification Strategy (NHES) in 2013, with a target of providing 300,000 rural households with off-grid electrification through solar home systems installations and other cost-effective, renewable energy technologies.

Meanwhile, Ghana has one of the highest rates of electrification in sub-Saharan Africa, thanks in part to its Self-Help Electrification Programme as well as the Energising Development (EnDev) partnership, which has prioritised grid extension for irrigation, solar-powered irrigation systems and improved stoves for processing cassava that are designed to consume less energy and reduce emissions.

“Under the Malabo Declaration, African governments have committed themselves to increase the use of reliable and affordable mechanization and energy supplies, including agricultural inputs. Africa is not on track to achieve the Sustainable Development Goals of universal access to affordable, reliable and modern energy services by 2030,” said Professor Muhammadou M.O. Kah, Vice President for Academic Affairs, Provost and Professor of Information Technology and Computing at the American University of Nigeria and Member of the Malabo-Montpellier Panel. 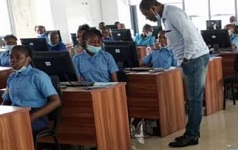 UN puts young African students on the path to innovations