Investment in agriculture and rural development may be among the best ways for Canada to realize the goals of its new Feminist International Assistance Policy, bringing gender equality and economic empowerment to millions of women and girls in developing countries around the world.

Houngbo is making his first official visit to Canada’s capital since being appointed President of IFAD, a United Nations specialized agency and international financial institution that focuses on agricultural and rural development in some of the poorest and most remote regions of the world.

“When Canadians think of what they can do to support actions of equality and empowerment for women and girls around the world, I’m not so sure they immediately think of agricultural development and investment,” said Houngbo. “But, three-quarters of the poorest and hungriest people live in rural areas and this is where development can have the greatest impact on the lives of women and girls.”

According to a 2014 FAO report, 43 per cent of agricultural workers worldwide are women. In parts of Africa and Asia that figure rises to 50 per cent or more. Investing in agriculture and rural development, explained Houngbo, can have a huge effect on women’s financial empowerment and self-esteem, girls’ education and family nutrition, not to mention feeding the planet. Research shows that providing female farmers with equal access to productive resources could lift an additional 150 million people out of poverty.

“By closing the gender gap in rural areas and creating better opportunities, women and girls can be powerful agents of change,” said Houngbo. “They not only improve their own lives and the lives of their families, but they have a tremendous impact on their communities and countries. That’s good for all of us.”

Between 2010 and 2016, IFAD-supported initiatives benefited 139 million people of whom 43 million increased their agricultural revenue and 24 million people, half of them women, moved out of poverty. Another important target group for IFAD is rural youth. In Africa alone, 10 million young people enter the job market every year. Houngbo said he believed the agricultural sector offers huge potential for young entrepreneurs and workers, offering an alternative to migration.

Canada is one of IFAD’s founding members. In addition to its strong support for gender equality, Canada has played a significant role in supporting IFAD’s efforts to ensure that its projects prioritize the production and consumption of nutritious foods.

Canada was also one of the first donors to IFAD’s Adaptation for Smallholder Agriculture Programme (ASAP) which helps smallholder farmers build their resilience to changing weather patterns and climate shocks. During the tenth replenishment of IFAD’s resources, Canada provided additional support to ensure that assistance for climate adaptation is mainstreamed throughout IFAD’s portfolio.

Despite these successes, Houngbo pointed out that it has never been more important to scale up efforts and to focus on long-term development. Last September, newly released figures showed that hunger increased for the first time in 10 years affecting 815 million people in 2016, up 38 million from 2015 because of climate change and protracted crises.

As world leaders set their sights on ending hunger and poverty by 2030 as part of their commitment to the Sustainable Development Goals, Houngbo said IFAD is embarking on an ambitious plan to increase its impact by exploring new ways to increase and diversify its resource base.

Canada is one of IFAD’s top contributors with US$456 million provided to the fund’s resources and investment portfolio since 1978. 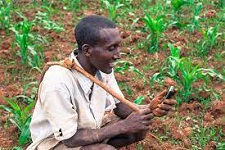 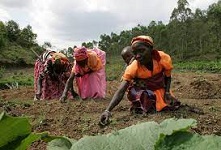