By Andualem Sisay Gessesse – Dr. Allan Makenzie is born and grown up in the rural village of Kenya within Machakos County. Thanks for his hardworking parents engaged subsistence farming, he managed to leave that village become a doctor.

Dr.  Makenzie, who calls himself today ‘telephone farmer’ is investing in agriculture creating jobs for many on his parent’s land. He uses improved seeds that give threefold harvest more than the traditional
seed variety. He has also invested a lot in a separate chicken farm, which is equipped with modern incubators as well as a cattle fattening and dairy farm.

“My mother also likes the new way of farming… I assume that the neighbors will also start following my steps,” he says, speaking about the promising future of technology assisted agriculture. Mr. Ngila Kimotho, the founder and managing Director of Dryland Seed Company is also from the same rural village of Machakos. He was also engaged in another business until he decides to take risk and invest in ‘the future’ agriculture.

Saving a million Kenyan Shilling, in 2004 he began an improved seed multiplication and distribution business. “After positioning myself as agro-dealer, I invested in this business noticing that farmers have
little access to improved seeds,” Kimotho says.

As the demand of the farmers grows, he saw the need to increase production of improved seeds, such as maize sorghum. As he was figuring out where to get additional money, he got information about Alliance for Green Revolution in Africa (AGRA) grant opportunity.

He then applied for the $150,000 and won AGRA’s grant for risk-takers like him who work to transform the continent’s agriculture using the latest agricultural knowledge and practices.

“This helped me to boost my production capacity of improved seeds from 5 tons per year to 25 tons,” he says indicating that his company is now in a position of producing 1,000 tons of various seeds every year.

His company first gets the improved seed varieties from research institutions such as Kenya Agricultural and Livestock Research Organization (KARLO), which have the patent right and pays royalty fee to use their seed variety. Other organizations like CIMMYT, a research firm working on wheat and maize seeds improvement, provide him their varieties without free of royalty fee.

To further boost his company’s seed production and storage capacity, Mr. Kimotho now is building a modern seed storage warehouse on 2,000 square meters close to Machakos city with $500,000 grant from another organization. He plans to export its seeds to neighboring countries
such as Tanzania and Ethiopia, which have similar ecology.

Farming in many countries of the developing world including Africa is highly dominated by the traditional agriculture practice, which recycles seed or uses the harvest as seed again and again. As a result productivity of those seeds remains the same or even goes down in most circumstances.

In addition, the frequent natural disasters such as droughts and floods, among others are causing starvation of millions. And countries like Ethiopia easily become foreign food aid dependents whenever rain pattern is distorted for couple of harvest seasons.

At continental level, today Africa is unable to produce food that feeds its around one billion people and spent $35 billion dollars every year for importing food. If agriculture remains to be done in the old ways, this figure reaches $110 billion ten years later, according to Dr. Agnes Kalibata, President of AGRA.

“[By doing so] we are sending away employment opportunities from Africa to other places. We can use it [the importing money] to grow our economy and out farmers,” she said.

On the contrary the population of the world is increasing while neither the farm land size nor the food production is growing.

As one of this puzzle some of the world biggest philanthropies Bill and Melinda Gates and Rockefeller Foundations launched the Nairobi-based AGRA in 2006. Ten years later this week heads of states
and officials from 40 countries are gathered in Nairobi along with their donors and experts to assess and craft the future of Africa’s agriculture.

Before the end of the meeting on they are expected to announce additional hundreds of millions of dollars in new investments for African farmers and agriculture business.

“Many governments face significant budget constraints and far too many farming families continue to lack basic inputs, like improved seeds or fertilizers. But the evidence is clear. When we invest in our farmers and in the all the things they need to succeed, good things happen across the economy,” she added.

One of the major interventions of AGRA is supporting the improving seed productivity supporting research for improved seeds, multiplication and distribution of these seeds so that majority of
African farmers will have access to.

Improving seed productivity at the research centers includes practices such as, combining the best drought resistant quality of one seed with another best disease resistant variety and finally discovering a new seed variety (hybrid) for a specific soil and agro-climate.

“If look back at the agricultural revolutions in the past, seed is the catalyst though the use of modern farming techniques, fertilizer and pesticides usage have also contributed a lot,” says Joe Devies, Director of program for Africa seed system at AGRA.

“We have invested in 120 seed companies many of them have the same success stories to tell. In addition we also funded 110 breeding programs so far,” he says.

One of the major challenge of using hybrid or improved seed varieties is that a farmer cannot reuse the harvest like they used to do with the traditional seed. If the seeds are reused, the harvest will decline. That means a farmer is expected to buy new seeds for every planting season, which makes it difficult to afford for the majority of African smallholder farmers.

Experiences over the past decade suggest that absence or limited credit facilities to smallholder farmers is challenging Africa’s agriculture revolution journey though good results are registered.

Transforming the continent’s agriculture requires between $315 billion to $400 billion investment over the next years from public and private sector in all aspects of food production, processing, marketing and transport, according to a new report that assessed the past ten years agriculture performance of Africa.

“The last ten years have made a strong case for agriculture as the surest path to producing sustainable economic growth that is felt in all sectors of society—and particularly among poor Africans. The track
record is far from perfect,” says Dr. Agnes Kalibata.

“Today many farmers know that there is a milk cow out there. The problem is they don’t have the money to use these improved seeds and related farming technologies,”Mr. Kimotho says stressing the need for
the credit facility for farmers make them part of the Africa’s agricultural revolution story.

At a press conference held on Monday in Nairobi to herald the 6th African Green Revolution Forum (AGRF) 2016, Wily Bett, Kenya’s cabinet secretary minister of Agriculture, Livestock and Fisheries, said use of innovations and solutions is a must to transform Africa’s agriculture.

“Economic development in Africa is impossible without agricultural development. For that we have to make agriculture a viable venture otherwise nobody will be interested in our agriculture… Countries and partners should cease the moment to transform African agriculture. Even in our industrialization process we can’t succeed if we don’t first transform agriculture,” he said.

As the saying goes, ‘when the going gets tough, the tough get going’, amidst the challenges African countries will be forced to join the tough journey of revolutionizing their agriculture at least for the sake of feeding themselves, cut their import bills and create jobs for their young generations like Dr. Makenzie and Mr. Kimotho. 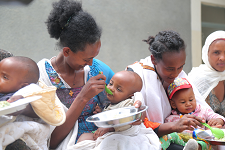