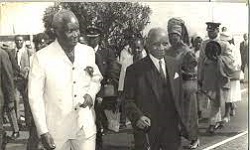 The founding father of Zambia former President Kenneth Kaunda passed away at the age of 97.

Global leaders and international organizations representatives such as UNAIDS have expressed their condolences to Zambians. “UNAIDS expresses its sincere condolences to his family, his friends and the country. Mr Kaunda was a strong supporter of the AIDS response and showed great leadership and courage in speaking out against HIV-related stigma and discrimination in the early days of the epidemic.”

Mr Kaunda, who lost a son to AIDS in the 1980s, was one of the first members of the Champions for an AIDS-Free Generation in Africa, a distinguished group of former presidents and influential African leaders mobilizing political leadership to end AIDS as a public health threat on the continent by 2030.

Mr Kaunda also dedicated time and effort to the AIDS response through his Kenneth Kaunda Children of Africa Foundation and through the Zambian Chapter of the Brothers for Life Campaign, which aimed to encourage healthier lifestyles among young men.

In 2018, UNAIDS conferred its Leadership Award on Mr Kaunda for his services to the global, regional and national AIDS response. Upon accepting the honour, he dedicated it to the people who had died of AIDS-related illnesses as well as those on the front line of fighting HIV. Mr Kaunda is also fondly remembered for performing at public events his song: We Shall Fight and Conquer AIDS.

“The sun has set on a great and good man, freedom fighter, pan-Africanist, founding parent of the Organisation of African Unity and giant of the HIV response,” said UNAIDS Executive Director, Winnie Byanyima. “He was brave, compassionate and tireless in confronting HIV-related stigma and discrimination from the early days of the epidemic and his contribution to Africa’s response will not be forgotten. We shall fight and conquer AIDS.”

The Joint United Nations Programme on HIV/AIDS (UNAIDS) leads and inspires the world to achieve its shared vision of zero new HIV infections, zero discrimination and zero AIDS-related deaths. UNAIDS unites the efforts of 11 UN organizations—UNHCR, UNICEF, WFP, UNDP, UNFPA, UNODC, UN Women, ILO, UNESCO, WHO and the World Bank—and works closely with global and national partners towards ending the AIDS epidemic by 2030 as part of the Sustainable Development Goals.