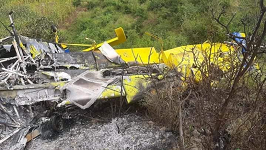 A helicopter crashed in Ethiopia on Friday morning in Amhara Region around Werebabo area while spraying pesticides against desert locust.

The state news wire, Ethiopian News Agency, has reported the crash occurred around 10.30 A.M. due to technical problem. The farmers in the area have managed to rescue the life of the pilot, according to the report.

The pilot is currently in Semera Hospital getting medical treatment. Ethiopia has been using small helicopters to stop the spread of forest locust worm, which has damaged crops in Eastern African countries mainly, Kenya and Ethiopia.

Last May the Food and Agriculture Organization (FAO) has handed over three helicopters to help Ethiopia control the invasion of desert locust. It was reported that at the time FAO leased the helicopters for three months at about $600 000 – part of the funding provided by the United States Agency for International Development (USAID. The report didn’t mention if the crashed helicopter is one of the three.

In addition to the helicopters supplied by FAO, the Government of Ethiopia has also leased three helicopters to control the desert locust. The total area treated in Ethiopia since June 2019 to May 2020 was around 267 000 hectares while over 454, 000 hectares have been surveyed.