The Government of France is set to provide 40 million euro to Ethiopia supporting the effort of the later to combat the spread of coronavirus.

This is announced today by Ahmed Shide Finance Minister of Ethiopia and Frederic Bontems, Ambassador of France in Ethiopia, who stated that the money will be disbursed through French Development Agency. It is stated that in addition to the COVID-19 response effort of Ethiopia the money is also expected to contribute to the overall economic reform program of the country.

The money is part of the 85 million euros France is planning to give to Ethiopia in support of the economic reform the east African country has recently launched. The financial support was signed last year when French President Macron has visited Ethiopia. So far the French development agency has invested some 500 million euros in Ethiopia supporting the development endeavors of the country. 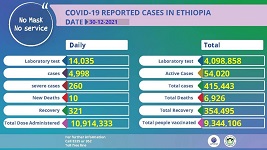