A fatal car accident in Ethiopia occurred on Sunday around Meki town, some 150 kilometers South of the capital Addis Ababa, claimed lives of 22 people.

The accident happened when a minibus coming from Meki town of Oromia Region to Addis Ababa has collided with a bus going to Hawassa city. Most of the causalities are children, according to eye witnesses. Road traffic accident has been one of the major causes of death in Ethiopia claiming over 4,500 lives every year. Most of the traffic accidents in Ethiopia have been occurring due to drivers, which is mainly high speed driving.

Last Ethiopian year concluded July 7, 2019, road traffic accident has claimed 4,597 lives, while 7,407 have sustained heavy injury. Some 5,949 have also sustained light injury. the cost of the accidents on property is estimated to reach 800 million birr (about $25.2 million) according to the latest traffic police report. Recently the government has launched awareness raising campaign highlighting the severity of the problem. 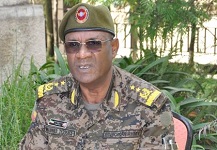