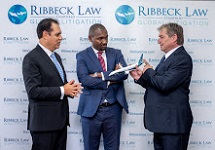 Families of victims of the two 737 Boeing Max crashes that killed 346 people in Indonesia in 2018 and Ethiopia in 2019 have begun to receive payments from the $500 million settlement agreement.

They are benefiting from the agreement reached in the case against Boeing. Ribbeck Law Chartered, which represents more than 90 clients made the announcement today after at least three years of litigation.

“For most of our clients, this puts an end to the civil and criminal cases filed against Boeing after the tragic crashes of Lion Air JT610 on October 29, 2018 and Ethiopian Airlines ET302 on March 10, 2019,” stated Manuel von Ribbeck of Ribbeck Law Chartered. Mr. von Ribbeck represented the majority of the families of the victims of the 737 Boeing Max 8 crashes.

At least 30 nationalities were on board. Another plane of the same model was involved in a crash less than five months earlier, when a Lion Air flight crashed into the sea near Indonesia with nearly 190 people on board.

“Families we have represented since the beginning of this tragedy involving the 737 MAX 8 crashes have started to receive the settlement funds,” confirmed Mr. von Ribbeck. He further commented, “The criminal case which found that serious, deadly mistakes were made by the Boeing Company has been brought to an end.”

Earlier this year, the Department of Justice charged the Boeing Company with conspiracy to defraud the United States. Ms. Monica Kelly of Ribbeck Law Chartered explained that the DOJ charged Boeing after a lengthy investigation which concluded that the company knowingly misled regulators while seeking approval for its 737 MAX aircraft.

Ms. Kelly stated that the government concluded that “the misleading statements, half-truths, and omissions communicated by Boeing employees to the FAA impeded the government’s ability to ensure the safety of the flying public.” A “key document published by the FAA, AEG lacked information about MCAS, and in turn, airplane manuals and pilot-training materials for U.S.-based airlines lacked information about MCAS,” the government said. As a result, Boeing entered into a deferred prosecution agreement.