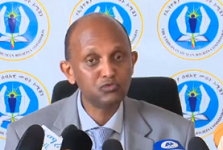 “EHRC has found that crimes against humanity was committed by individuals and groups who directly participated in the violence and security crisis that swept through Oromia Region of Ethiopia following the death of musician Hachalu Hundessa on June 29th, 2020.EHRC visited over 40 different localities in Oromia Region over the course of several days as part of its investigation into human rights abuses committed there between June 29 – July 2, 2020, findings of which were released today,” the Commission said today launching its report to the media in the capital, Addis Ababa.

“In the 59 pages report, the findings state that attackers moving in groups used axes, knives, machetes, sticks and other weapons to kill and injure civilians in gruesome ways that involved beheadings and torture. Altogether, 123 people died and more than 500 were injured in the carnage that also displaced thousands from their homes,” it said.

The findings show that the attacks meet the elements of a crime against humanity with large numbers of people, organized in groups, having selected their victims on the basis of their ethnicity or religion when conducting a widespread and systematic attack in several different areas over the three days.

The report also states, while it is understandable that security forces had the challenging task of restoring order in the face of such widespread violence, the proportionality of the force employed in some contexts is highly questionable. In some instances, security forces employed disproportionate force in their attempt to restore order amidst widespread violence and as a result, passersby, bystanders, young people, elderly people stepping in to mediate, and even police officers lost their lives from gunshot wounds despite having no participation in the unrest.

EHRC’s Chief Commissioner Daniel Bekele said, “Given the repeated pattern of atrocity crimes in the country, Ethiopia needs to design and implement a comprehensive national strategy for the prevention of atrocity crimes which aims to address the root causes of the problem”.

More specifically the report listed the following points,
● A large number of people, organized in groups for the most part, moved from place to place to kill, bodily and mentally injure and displace people; destroy property,

● The conduct was committed as part of a widespread and systematic attack against civilian population that extended to at least 40 different localities and over three days from the early hours of June 30 th to July 2 nd , 2020,

● Some targets in the attacks were selected on the basis of ethnic and religious identity. Other civilians were attacked with intent regardless of their religious or ethnic affiliation,

● The social media and television content/messages broadcast/circulating at the time as well as the slogans chanted by perpetrators of the crime show that the individuals and groups taking part in the conduct acted in a strategic and coordinated manner with full knowledge of the act thereof.

On the basis of the above findings, the overall conduct carried out by the attackers who were organized in groups, and the result thereof, is not a simple criminal act but a crime against humanity which is an atrocity crime and a grave violation of human rights.