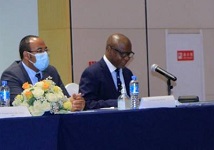 “Digitalization of logistics will be critical to match the demand and supply of transport services, thereby reducing the time and cost of delivering goods,” said Robert Lisinge, Chief of the Energy, Infrastructure and Services Section at the Economic Commission for Africa (ECA).

He was speaking on 15 June 2021 during a meeting with representatives of Ethiopia’s ministry of transport and other stakeholders to review and validate a study on the gaps that exist in the digitization of Ethiopia’s logistics sector.

The study, titled “Gap Assessment of Logistics Digitalization in Ethiopia,” was supported by ECA through technical assistance and advisory services to the Ministry of Transport of Ethiopia.

Ethiopia’s State Minister for Transport, Yeshualashet Jemere, who presided over the meeting, expressed appreciation for ECA’s support, stating: “ECA has stood steadfastly beside Ethiopia in the country’s drive to modernize its transport and logistics sector. ECA’s commissioning of the study to assess the gap in the digitalization of logistics in Ethiopia was eloquent testimony in that regard”

Mr Lisinge thanked the Minister for his “strong leadership,” noting that Ethiopia’s national strategies and plans to develop and modernize its transport and logistics sector “underscore the country’s desire to open up the sector, which is essential for attracting private sector investment.”

Describing the digitization initiative as “timely” given ongoing AfCFTA implementation, Mr Lisinge said the “free trade area will lead to significant increase in trade flows between African countries with implications for the demand of different modes of transport – road, rail, maritime and air transport.”

The AfCFTA will also necessitate “upgrading of critical infrastructure that are likely to experience a surge in trade flows and countries will need more trucks, rail wagons, aircrafts and vessels to cope with the anticipated increase in intra-African trade,” he added.

Mr Lisinge pledged ECA’s continued support to the Ethiopian ministry of transport, adding “I would like to assure you of our willingness to support the implementation of the recommendations of the final version of the gap assessment report.”

Journalists from the globe confer in Ethiopia