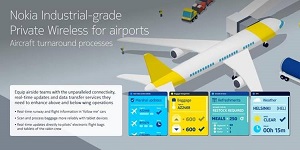 Aviation has always been at the cutting edge of technology, adopting new innovations that made it a critical player in global travel and commerce. Air transportation not only facilitates social connections but also acts as a conduit for goods and services. The journey, however, starts from one vital site – the airport.

Modern airports are more than just a place where aircraft land and take off. They are sprawling complexes spread across thousands of acres that act as gateways to cities, regions, and countries for millions of travellers. It employs thousands of personnel and is a major hospitality and retail hub.

Despite the massive disruption caused by the COVID-19 pandemic, passenger and cargo volumes are going to increase in the future and airports need to step up. To stay in the race, they will have to reinvigorate infrastructure and improve efficiency.

Getting the basics right

Over the last decade, a host of new terms have proliferated the aviation business, including ‘smart airport’, ‘self-service’, ‘connected traveller’, ‘location-based services’ etc. Connectivity forms the bedrock of all such applications. It links equipment, resources and assets, the Internet of Things (IoT) and enables data sharing from the farthest corners of the airport.

Transitioning to a digital environment requires a holistic approach involving two important areas of any airport. The airside comprising of the apron, taxiway, runway and the zone beyond security, passport and customs control, like duty-free, lounges and boarding gates. Next is the landside consisting of the terminal buildings, parking bays, roads and public transport network.

Taking off for Airport 4.0

Airport 4.0 is the air transport hub of the future. Using the latest advancement in wireless and wireline connectivity, automation, artificial intelligence (AI), robotics and digital twins this wave of digitalization is set to take operational and situational awareness to a whole new level, reduce costs and generate diverse forms of non-aeronautical revenues.

Consequently, airports would also seek to revisit current LAN practices. Airport LAN typically uses copper-based CATx switches, which require equipment closets every 600 feet to overcome the distance limitations of CATx cable. The latest LAN technologies use fiber and support terabits of data and miles of distance. They remove the need for equipment closets and protect airports’ investment in passive infrastructure.

“Connectivity can no longer be treated as a commodity. It is a strategic asset that is as important to an airport as the runway,” says Richard van Wijk, Global Public Safety & Aviation Practice Lead at Nokia.

Time is of the essence at the airside. With aircraft arriving and leaving the ramp, it is one of the busiest areas of the airport. Even though some of the processes are already digital, many still rely on tedious paperwork. Connections at airside are mostly through Wi-Fi and suffers from connectivity challenges, especially below the wings. Public cellular services fall woefully short of providing reliable connectivity with coverage gaps often being the norm. Such issues make it extremely daunting for airports to realize their digitalization goals.

As wireless technology matures, enterprises have started to use purpose-built secure private wireless networks. Based on 4G or 5G, it supports services that allow airports to enable applications in a secure and reliable way. Moreover, to remove operational complexity such private networks can be offered as a service with the airport having full autonomy in terms of scaling the network. Essentially, a private wireless network creates the very foundation for Airport 4.0 by making it simpler to embrace process digitalization and ditch paper and pencil.

Apart from these distinct benefits, private wireless allows better operational and situational awareness, boosting incident response and minimizing the impact on turnarounds. The airport operations center (APOC) mainly relies on verbal push-to-talk communications. At airside, it often fails to follow an incident that occurs beyond the CCTV’s field of vision.

This problem can be resolved by intelligent application-based solutions that would communicate with remotely controlled pan-tilt-zoom cameras fitted on marshal cars or first responder vehicles, allowing the APOC to accelerate decision-making. Airports can even capitalize on a monetization opportunity by offering these services to their stakeholders in a multi-tier subscription model.

“A private wireless network allows an airport to cut the wires while extending pervasive broadband connectivity throughout the terminal. It is the ideal solution for increasing asset location flexibility as well as for providing quick, cost-effective connectivity to new assets,” says Thomas Rehberg, Head of Nokia’s Airports & Airlines business.

Given how technology has progressed in recent times, airports are now able to offer tailormade services to passengers. Right from the moment they arrive and until boarding the flight, travellers are increasingly being exposed to personalized information. Today’s passengers expect a seamless digital experience. They are tech-savvy and want to be in control of their journey, spending minimal time going through the formalities. The ‘connected traveller’ opens the possibility for airports to introduce more versatile apps for better engagement and create incentives to do business with the individual.

Flicking on the digital switch

If airports wish to remain resilient, maintain profit margins and meet green targets, complete digitalization is a must. Upgrading subsystems and processes would require a multi-pronged strategy involving new tools, mating existing systems with the latest solutions and training staff to the highest standards. For a digital transformation program to be effective, airports should select the right technology partners, identify a model that caters to its needs and pre-empt customer behaviour.

Digitalization can be a gamechanger for airports and it is not even starting with the fanciest like augmented reality (AR) or an avatar guiding the passenger in the terminal. It can be done from probably the simplest things and gradually moving on from there to a full-fledged digital ecosystem.