Ethiopia needs a national biotechnology policy in order to develop its capacity and apply the technology in agriculture, environment, health and energy sectors, say scientists.

“In order to characterize and catalog its natural resources for use to its benefit, the country needs a national biotechnology policy and strategy,” said Dr. Tilahun Zeweldu, regional coordinator of the Uganda-based Agricultural Biotechnology Support Program (ABSPII).

“Biotechnology is a powerful trillion dollar industry. We can benefit from it if we are smart enough to use it to our advantage. The technology along with other efforts such as changing a primitive farming system, reducing land degradation, etc, can end Ethiopia’s dependency on food aid,” he said.

The scientist made the statement while presenting his paper to the media (July 20, 2010) at a half day meeting organized by the Ethiopian Environmental Journalists Association here in Addis Ababa.

Stating that even thought there were efforts in Ethiopia to use biotechnology for improving the poor performance of the agricultural sector by applying such inputs as bio-fertilizers, the country is not able to scale up such research out puts due to a lack of policy and strategy, according to Dr. Tilahun.

He also noted that if such a policy and strategy had been in place bio-fertilizer, which is produced in Ethiopia and has been tested on the ground a few years as of would have been used on a large scale.

“Scaling up the production and dissemination of bio-fertilizer needs a strong public-private partnership guided by a proper policy and strategy,” he said.

The debate on genetic reengineering crops

The issue of Genetically Modified (GM) crops was the main issue of debate during this meeting. “Before introducing GM crops to Ethiopia in the name of biotechnology, we have to consider first the human and ecological risks,” said Gebremedhine Birega, Director of Ethiopian Society for Consumers’ Protection.

“We need to answer the issue of safety and ownership/patent before distributing GM seeds to our farmers. This is the new re-colonizing the world strategy of American and its giant companies by controlling the seed, then the food and our life at the end,” he said.

“I am not saying GM seeds are completely safe, but we can use them with care just like we use electricity,” said Professor Peter Gregory of College of Agriculture and Life Sciences at the New York-based Cornell University.

“I don’t buy the idea of comparing other technologies with this one. As the technology is new, we first need information on the science itself before deciding whether to use it or not,” Gebremedihin argued.

“If something goes wrong your government can subsidize your farmers, but my mother’s non GM crop will be dominated by the powerful GM crops and be kicked out of the market,” he said.

If something with GM crops goes wrong the promoters who think that the technology will improve Ethiopia’s agricultural production have to take the responsibility, according to Genbremedhine.
Responding to the argument and accepting some of the concerns of Gebremedhine, “Other countries’ farmers are using GM seeds because they are benefiting not because they are subsidized,” said Professor Peter Gregory.

“Beyond speculation, no evidence has been found so far that shows the harm caused due to GM crops,” according to the professor.
Concluding the debate, “There is no difference in our objective, the difference lies on how we help our people get enough nutritional foods and become self sufficient,” said Dr. Tilahun who also advocated for need to understand, localize and use the technology gradually.
“We have to generate our own technologies and build our capacities in relation to the application of GM crops or other biotechnologies for feeding ourselves, instead of complaining about others’ technology,” he concludes. 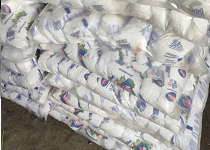