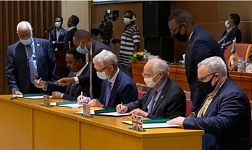 Troika statement from the UK, Norway and USA: Today, the governments of the United Kingdom, Norway and the United States (the Troika) signed the Juba Peace Agreement as Witnesses in a signal of political support to the Agreement.

Having welcomed the Agreement in October 2020, this further step demonstrates our commitment to the success of the Agreement and its potential to help meet the calls of the Sudanese people for freedom, peace, and justice, including for those affected by conflict in Darfur, South Kordofan and Blue Nile states, as well as other historically marginalised parts of Sudan. We urge immediate steps to fully implement and adhere to the agreed timelines set forth in the transitional Constitutional Document and the Juba Peace Agreement, including the formation of key institutions such as the Transitional Legislative Council.

We take this opportunity to commend the parties to the Agreement for the progress that has been made since October 2020, including the expansion of government to include wider representation. We also commend the progress made by Prime Minister Hamdok and the transitional government in delivering vital reforms that are essential for the transition to democracy to succeed, including economic and legal reforms. We do, however, recognise that efforts to deliver key provisions of the Agreement must be increased, including the formation of the joint force and the establishment of the ceasefire monitoring mechanism to help protect civilians in Darfur from conflict and violence.

Accountability must also be prioritised, including for gender-based violence and conflict related sexual violence, to strengthen the rule of law and protection of civilians. We welcome the parties’ commitment to full and unlimited cooperation with the ICC over Sudanese individuals subject to arrest warrants. Moving forward we call for full, equal and meaningful participation of women at all levels of governance and in legislation, including in the peace process. We know from experience and research that inclusivity leads to a more sustainable peace and a more democratic society.

UNITAMS plays a key role in supporting implementation of the Juba Peace Agreement. We encourage Sudan’s national and local authorities to facilitate and cooperate with the UN mission and UN Country Team in supporting speedy implementation of the Agreement. As progress is made the Troika will continue to stand with Sudan and its people. Our signatures today signal that commitment.

The Troika also welcomes the agreement on a Declaration of Principles between the Government of Sudan and the Sudan People’s Liberation Movement-North/Abdelaziz al-Hilu and encourages both sides to reach agreement on ending their conflict so all Sudanese can play a part in the transitional process. We also continue to make our call for the Sudan Liberation Movement/ Abdulwahid al-Nur to begin talks as part of achieving a comprehensive peace involving all major armed movements. The Government of Sudan has described the Juba Peace Agreement as ‘Phase One’ of the peace process and the negotiations with al-Hilu and al-Nur as ‘Phase Two’.

The Troika consider the implementation of the Juba Peace Agreement and the simultaneous ‘Phase Two’ negotiations to be of equal importance and we believe the success of Sudan’s transitional period rests on finding unity in diversity based on equal rights and building sustainable development through inclusive policies. The Troika looks forward to continuing our support for the parties in delivering peace, stability, and democracy for all Sudanese.