After Eritrea became an independent nation in 1993, the country was doing well economically and politically. In fact, at one point it becomes top coffee exporter in Africa without planting a single coffee tree.

The reason the two countries went to war in May 1998, which resulted in the death of at least 70,000 people, is beyond border conflict, according to many researches done on the issue. The economic and political issues get more weight than the territorial claim.

Because of the war, Ethiopia stopped using the closest and cheapest Assab Port of Eritrea and forced to open a new revenue stream for the tiny nation, Djibouti, which now earns couple of millions of dollars every day opening its port facilities to Ethiopia.

At some point as result of the vague relationship between the leadership of these two old friends, Eritrea was exporting Ethiopian coffee as if it was produced in Eritrea, according to media reports.

“For roughly three years following Eritrea’s secession from Meles’ Ethiopia, there appears to have been no serious discourse bilateral discourse. Issaias and Meles – these guerrilla allies turned heads of state – had consistently managed on a highly personal, cordial basis.

But, relations between the two governments began to unravel in 1997 [just one year ahead of the deadly war],” Kevin Hamilton, writes in his 135 pages paper, ‘Beyond the border war: The Ethio-Eritrea conflict” published by Princeton University of the United States.

Even after the war is ended in June 2000 after ‘the Algiers agreement’, they haven’t been able to restore peace.

Eritrea blames Ethiopia for not willing to implement the agreement. Since then the two nations have been ‘neither in peace nor in war’, as many described it. There have been several reports of small scale border clashes between the soldiers of the two nations along their borders.

Last week’s fighting
But the incident reported last weekend is the major one after the bloody war between the two old friends.

“There was incident on Ethiopia- Eritrea border.  The incident led to major engagement between our two forces,” Getachew Reda, Ethiopia’s Minister of Government Communication Affairs, confirmed at the press conference in Addis Ababa on Tuesday (June 14, 2016).

It was Eritrea’s information ministry that issued the first statement accusing Ethiopia for wagging war against Eritrea. “The TPLF regime has today, Sunday 12 June 2016, unleashed an attack against Eritrea on the Tsorona Central Front. The purpose and ramifications of this attack are not clear. The Government of Eritrea will issue further statements on the unfolding situation,” the ministry issued statement from Asmara on Monday.

During the press conference, which is dominated by the recent incident between the Ethiopia and Eritrea clash, Minister Getachew said that it was Eritrea who fired first and provoked Ethiopia to launch major counter attack.

From the statement of the minister one can guess that Eritrea is using different tactics to overstretch Ethiopian army by supporting and dispatching Ethiopian opposition fighters, which the government calls terrorists, in different directions.

“They [the Eritreans] used to send people through Tigray and Amhara Regions, which was the staple for most of their operations through Ginbot 7 or the alphabet soup of self-styled Ethiopian liberation movements here and there. Now they have changed tactic and they are trying to send elements through unusual directions- South, Southwest. So, we believe that the measure that we took the last two days will send sufficiently clear message to the regime,” Getachew said.

Likewise, Eritrea has also been accusing Ethiopia for hosting the Eritrean Democratic Alliance, which is a group of 13 political groups working to end Isaias Afewerki’s regime.

Stating that if Eritrea limits ‘its nasty behavior to itself’, it is none of Ethiopia’s business, Getachew said: “We sympathize with the people of Eritrea. We would be extending whatever support is necessary to help Eritreans get rid of the tyrant regime. But it is not for us to change the regime directly. Getting rid of the tyrant regime is not our duty,” Minister Getachew said, stating that Ethiopia’s troops have returned to their border position after accomplishing their mission.

“…The regime [in Asmara] has been working hard to destabilize the entire region…We believe we have sent sufficiently clear message to the regime in Asmara,” he said. Following Mr. Getachew’s statement, the ministry of information of Eritrea has also issued a statement on Tuesday claiming victory from the two days war.

“The attack launched by the TPLF regime on the Tsorona Central Front on Sunday, 12 June 2016, has been repulsed with TPLF troops sustaining heavy causalities,” said Eritrean Information ministry on its statement on Tuesday.

“…It is nonetheless clear that mounting opposition from popular movements of the Ethiopian people, endemic corruption and associated economic crisis, as well as the desire to steam promising progress in Eritrea are indeed some of the factors prompting the TPLF regime to indulge in reckless military adventures,” it said.

Eritrea and UN sanction
Commenting on the attack of Ethiopia troops in Somalia by Al Shabaab, Minister Getachew also mentioned about the UN sanctions on Eritrea for supporting Al Shabaab, which Asmara’s regime has been denying supported by U.S. lobbyists.

Speaking recently on a conference organized by the United States based Ethiopian opposition groups, Ambassador Herman Cohen, the U.S national who has facilitated the end of Mengistu Hailemariam’s regime and helped Meles and Issaias to realize their dream, said that there no evidence was found that shows Eritrea helping Al Shabaab.

As the two neighbors, who seem convinced that sustainable peace is impossible unless one’s or the other’s current regime is overthrown / abolished, observers are warning the two nations to stay away from repeating another deadly war.

“The United States is gravely concerned about the military action that took place on the Ethiopia-Eritrea border, June 12 and 13. As both Ethiopia and Eritrea are party to the 2000 Cessation of Hostilities Agreement and there cannot be a military solution, we call for both sides to exercise restraint and engage in political dialogue. We also urge both Ethiopia and Eritrea to cooperate in promoting stability and sustainable peace in the region,” John Kirby, Assistant Secretary and Department Spokesperson, Bureau of Public Affairs, said on Tuesday.

The African Union and European Union are also expressing their concern and are urging the two nations to avoid further military engagement. The Chairperson of the Commission of the African Union (AU), Dr. Nkosazana Dlamini-Zuma, calls on the two countries to exercise utmost restraint and to refrain from any statement and action likely to aggravate the situation and further endanger regional stability.

As peaceful coexistence of the two regimes seems unlikely, now the question many insiders ask is, ‘which regime succeeds in helping the overthrow of the other either through another round of full scale war or working behind the scene and helps the coming of oppositions to power?’ 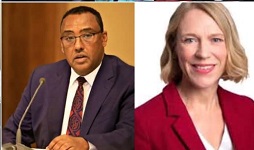