Initiated by the reformist Prime Minister Abiy Ahmed of Ethiopia, the leaders of Somalia and Kenya met today to peacefully resolve their dispute over the Mediterranean Sea oil.

“Through the leadership of PM Abiy Ahmed, President Kenyatta and President Mohamed Abdullahi met this morning to discuss extensively on the source of the two countries dispute. As an outcome both agreed to work towards peace & to take measures in addressing particular issues that escalated the tensions,” the Office of The Prime Minister of Ethiopia twitted this morning.

The tension between Somalia and Kenya is a major threat for the region, which the world is closely watching, according to Mr. Nigussu Tilahun, Press Secretary of the Prime Minister Office of Ethiopia, who spoke to the state broadcaster – ETV last night.

“During the peace talks in Kenya, the leaders will discuss on how to peacefully resolve their differences before it turns into a major regional problem. It is expected that the leaders will reach an agreement in this regard,” Mr. Nigusu said.

“Because the Prime Minister Abiy has observed the interest of both leaders to engage in peaceful dialogue, he and the President of Somalia went today to Kenya,” he said.

The two countries have cut their diplomatic ties closing their embassies. Unless the tension between the two nations is eased, the consequence will not only be limited to the two countries but also to the region including Ethiopia, according to Mr. Nigussu, who spoke to the state broadcaster – ETV an hour ago.

“Taking this fact into consideration, Prime Minister Abiy has consulted independently taking long time with both the Kenyan President a few days ago and now with Somalia’s President Mohamed Abdulahi,” said Mr. Nugussu.

Reports show that over the past five years the tension between Somalia and Kenya has emerged as a result of an auction off oil and gas blocks for oil and gas facilities in the sea between the two countries.

Mr. Nigussu also indicated that the fact that Ethiopian Prime Minister Abiy has also met with Somaliland President in Addis Ababa a few weeks ago, shows his intent to bring lasting peace in the region by bringing everybody aboard.

Speaking at the inauguration of Debre Birhan Industry Park of Ethiopia, President Uhuru indicated that people of Somali or Ethiopia, Kenya Sudan or Eritrea are the same and need to collaborate ad work together.

Before their departure to Nairobi, Prime Minister Abiy and President Mohamed Abdulahi have consulted on peace and regional economic integration, according to the statement from the Office of the Prime Minister.

During their discussion this morning Prime Minister Abiy and President Mohamed Abdulahi of Somalia have consulted on how to strengthen regional peace and security per the agreements signed previously, according to the statement from the Office of the Prime Minister.

They also discussed mechanisms on how to ensure strengthening of the Kenya-Somali relations as well as about the continuation of joint port development between Ethiopia and Somalia. The statement of the PM Office has indicated that the two leaders have also discussed on how to ensure relations with the administration of Somaliland and Somalia is in support of regional peace. 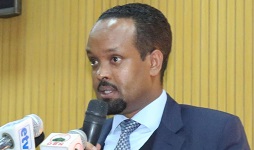