Dr. Birhanu has got 912 votes of the participants of the founding members of Ethiopian Citizens for Social Justice gathered from over 300 weredas (districts) of the country. Over 1200 participants from across the country has been conferring in Addis Ababa since yesterday to launch the new opposition party of Ethiopia that promotes citizens- centered politics in order to bring social justice in Ethiopia.

Following his appointment to lead the party, Dr. Berhanu stated that his priorities will be working with the government to restore peace and order to ensure democracy, laying the foundations of the new party at the grassroots level to make it long lasting and sustainable and contributing to the development of a democratic society in Ethiopia. The founding congress of the new party has also elected Andualem Arage as deputy leader of the party.

After the Coalition for Unity and Democracy (CUD), the opposition coalition worn all the seats but one in the capital, Addis Ababa, during the May 2005 national election, Dr. Berhanu was the mayor elect of Addis Ababa.

Meanwhile, as the controversy that followed the lection has ended him in jail and later to exile from where he and his colleagues launched the armed Patriots G7 group, which was fighting the current regime from its base in Eritrea. Dr. Berhanu, who was also a university professor in the U.S. and all Ethiopian opposition party figures have returned home following the pardon announced by the reformist Prime Minister Abiy Ahemd who came to power about a year ago.

Today the new party has also elected Yeshwas Aseffa as its chairman who will be in charge of the party’s affairs. Mr. Yeshewas told FBC, the ruling party owned media, that he will be working to make this new party become one major alternative for the people of Ethiopia for the coming 100 or 200 years.

The chairman also stated that they will be working in all parts of the country to prepare candidates for the upcoming May 2020 national election of Ethiopia. The chairman of the party will be working under the leader, who has more power, according to the structure of the new opposition party. 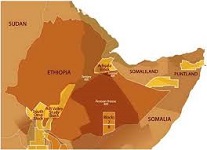