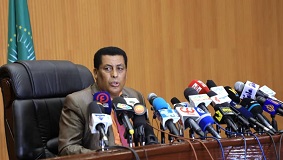 The Spokesperson of the Ministry of Foreign Affairs of Ethiopia Ambassador Dina Mufti said whoever wins the elections; the people of Ethiopia are the ultimate winners of the election.

Ambassador Dina Mufti, gave the Ministry’s biweekly press briefing today to the media. He announced Ethiopian people have shown that they are wise enough to understand that their country stands tall beyond temporary wins for parliamentary seats or the lifespan of a political party.

During his two-day stay, he met with senior government officials of the United Arab Emirates and discussed ways to further strengthen bilateral relations and cooperation between the two countries in various fields.

Demeke had a meeting with Russian Foreign Minister Sergei Lavrov, he explained the current situation in Ethiopia and agreed with Russia to further strengthen the historical ties between the two countries in various fields.

The Ministry of Foreign Affairs of Ethiopia has issued a statement explaining that the unilateral announcement of ACHPR on establishing a “Commission of Inquiry” will undermine the cooperative spirit and the ongoing efforts of the Government of the Federal Democratic Republic of Ethiopia to formalize the modalities of the investigation in the alleged humanitarian atrocities in Tigray.

Furthermore, the Ethiopian Federal Supreme Council for Islamic Affairs denounced the statement made by Sheikh Ahmed Al-Tayeb, Sheikh of Al-Azhar Al-Sharif of Egypt regarding the Grand Ethiopian Renaissance Dam, According to MoFA. (Walta)

Eritrea set to dispatch delegations to Ethiopia for negotiations