The United States and Ethiopia held their 8th Bilateral Dialogue on Human Rights, Democracy, and Governance at the Ethiopian Ministry of Foreign Affairs. The two sides met on July 19, 2018 to discuss ways that the countries can partner to advance the democratic reform process in Ethiopia.

During the discussion, both sides highlighted the importance of supporting the democratic reform efforts initiated by Prime Minister Abiy Ahmed and his administration.

The two countries agreed to pursue strengthened bilateral cooperation in support of those goals in the following ways:

In his opening comments, U.S. Ambassador to Ethiopia Michael Raynor said “this dialogue comes at an extraordinary and historic moment in Ethiopia, where we see the possibility for one of our most important partners to chart a new course toward a bright future.”

He added, “I want to extend to you the firm and sincere commitment of the United States government to support your work to make the ambitious goals we have heard over the last several months a reality. Progress in these areas will not only be good for the people of Ethiopia, and will not only be good for the long-term stability, prosperity, and governance of the country, but will also create new opportunities to deepen and strengthen the U.S.-Ethiopia partnership across the board.”

The United States was also represented by senior officials from the State Department Bureau of Democracy, Rights, and Labor, including Deputy Assistant Secretary Scott Busby, who reinforced the U.S. commitment at the highest levels to supporting Ethiopia’s democratic development: “U.S. officials in Washington are also very excited about the opportunities presented by recent developments in Ethiopia, and will be exploring various ways in which we can help.” 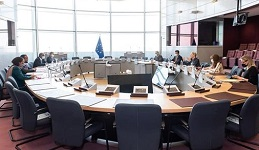