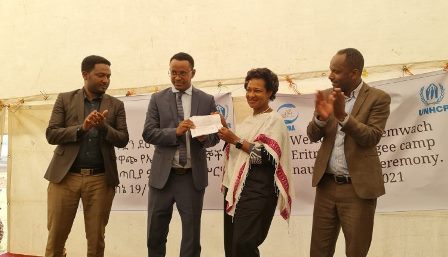 Ethiopian Agency for Refugees and Returnees Affairs (ARRA) in partnership with the UNHCR finalized preparations to buid shelters for Eritrean refugees in Dabat, North Gondar Zone of Amhara Region.

Officials of North Gondar Zone of Amhara Region have handed over land for building of the Alemwach Refugee Camp in the the precense of Director General of ARRA, Tesfahun Gobezay and and UNHCR Ethiopia Director Ann Allen Encontre.

The camp will host Eritrean refugees and is needed as there is currently lack of space in the two existing camps in Tigray region.

UNHCR Ethiopia representaitve, Ann Allen Encontre expressed gratutude to the zonal and local administrative officials of the Amhara Region for alloting the land for the refuge camp construction, adding that the shelters will provide refuge and sanctuary for thousands of Eritrean refugees in need.

The ARRA Director General, Tesfahun Gobezay, to his part, reaffirmed commitment of Ethiopia to continue solidarity with people in need of protection. (FBC)