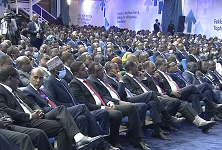 At the ongoing assembly representatives from different countries such as, South Africa’s African National Congress, NRM from Uganda, and Turkish representative, from Turkish ruling party, and Djibouti have addressed the gathering. The speakers expressed their support of their governments and their people to Prosperity Party.

“Prosperity is indeed a party that has brought peace, stability and political reform in Ethiopia,” said the representative of the neighboring Government of Djibouti, Minister of Finance. He like most speakers also expressed his hope that the national dialog Ethiopia is set to launch will bring national consensus among all Ethiopians.

He stated that for the best of our common destine strong prosperous strong Ethiopia is important not only for Ethiopia and Djibouti but for all the continent.

Led by Prime Minister Abiy Ahmed, Prosperity Party has united three of the previous four parties ruling coalition Ethiopian Peoples Revolutionary Democratic Front (EPRDF). Meanwhile one of the four parties Tigray Peoples Liberation Front (TPLF), which dominated the ruling coalition for some 27 years, has refused to be part of the merger.

Meanwhile other political parties, which mainly were leading the peripheral regions of Ethiopia – Somali, Gambella, Benishangul, Afar and Harari have joined Prosperity Party, which is holding its first general assembly today.

Even though it has been about two years since Prosperity party has taken over EPRDF, the party has not been able to hold its general assembly partly due to the political turmoil followed the departure of TPLF from the coalition, COVID-19 pandemic, and preparations for the last June general election, among others.

Coronavirus cases in Ethiopia increase to 429