As the National Defense Force of Ethiopia is encircling Mekele city, the capital of Tigray Region, Prime Minister Abiy Ahmed gives another 72 hours for the leaders of Tigray Peoples Liberation Front (TPLF) to surrender.

“…We urge you to surrender peacefully in the coming 72 hours. Use the last chance. We call upon you to avoid additional loss of lives and destruction of city,” Prime Minister Abiy Ahmed twitted indicating that the sun is about to set on their journey of destruction.

He also calls upon the special force and militias of TPLF that it is not too late for them to peacefully surrender. In addition, the statement also calls on the people in Mekele town to cooperate with the Ethiopian Army like the people ion other towns of Tigray already set freed from TPLF. “A single life or a property should not be destroyed for the sake of some grudging junta,” it said.

The overall safety and well-being of the people of Tigray is of paramount importance to the Federal government and we will do all that is necessary to ensure stability prevails in the Tigray region and that our citizens are free from harm and want. pic.twitter.com/4u7NzfPZQ0

In a related development, the chairman of the African Union, South African President Cyril Ramaphosa has indicated his plan to send an envoy to Ethiopia to peacefully end the military operation in Ethiopia. He announced the plan to Ethiopian President Sahle-Work Zewde who visited South Africa over the weekend.

4/4 I took note of the President’s decision to send Special Envoys to meet our authorities. I also thanked the President for facilitating the AU led negotiations on the GERD.

After the TPLF militia has attacked the northern command of Ethiopian Army in Tigray Region on November 4, the Government of Ethiopia has launched an offensive and liberated several towns of Tigray region from the TPLF militia. The Government of Ethiopia has been indicating that the military operation in Tigray region is to bring the fugitives to justice and not interested to negotiate with what it called “a junta that has made treasonous acts attacking Ethiopian army”. 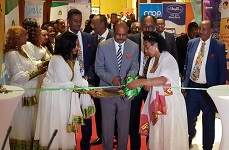