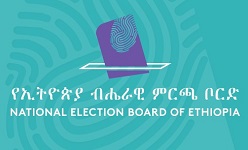 By Basaznew Wondimneh – The National Electoral Board of Ethiopia (NEBE) said it will not recognize the decision of Tigray Regional Administration to hold election and the request to handle / manage the election in Tigray Region.

The statement of NEBE came on Wednesday weeks after the ruling party in Tigray Regional state decided to hold regional election separately refusing the federal parliament decision to postpone all general election of the country, which was scheduled previously to be held at the end of August this year. Meanwhile, because of the danger posed by the global pandemic – coronavirus, NEBE was forced to suspend its preparations to hold the 6th general election on time. Ethiopia holds general elections every five years. The term of the current ruling coalition ends this September.

That decision of NEBE was followed by the parliament decision, which a few weeks ago decided to postpone the general election of Ethiopia in all regions at least for nine months to one year after the country makes sure that coronavirus will not be a danger to the country. Following that decision, the Tigray Peoples Liberation Front (TPLF), which is the ruling party in Tigray Region has refused to accept the decision of the Parliament and decided to hold general election in its region before September this year.

The TPLF began dispute with the federal government after it has lost its dominance in the ruling coalition, Ethiopian People Revolutionary Democratic Front (TPLF), after the reformist Prime Minister Abiy came to power unexpectedly.

Abiy represents the Oromo Democratic Party, one of the four member parties, which established the EPRDF about three decades ago. TPLF led the arms struggle against the Marxist Regime of Mengistu Hailemariam, came to power in 1991 establishing EPRDF. The four founding members of EPRDF, which recently re branded itself as Prosperity Party, were parties representing Oromo, Amhara ethnic group, and the parties that represent Tigray and Southern regions of Ethiopia.

After leading the country for the last 27 years as a dominant party in the ruling coalition, TPLF has turned itself into a minority opposition party claiming to represent the about 6 percent of the total population of Ethiopia. TPLF has refused to be led by the reformist Prime Minister Abiy Ahmed, who merged the remaining three parties in the coalition and brought five other ruling parties in charge of the peripheral areas of the country and converted EPRDF into Prosperity Party of Ethiopia.

The dispute between the federal government and TPLF has now reached a tipping point where the latter vowed to hold general election refusing to accept the decision of the federal parliament. The few questions many are raising include, will TPLF hold the election and will that election be acceptable without involvement of the NEBE, which is in charge of managing all elections in the country? Will the federal government of Ethiopia led by Prime Minister Abiy intervene to stop the election TPLF is trying to hold in Tigray? What will that intervention brings?