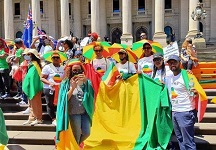 The Ministry of Foreign Affairs of Ethiopia calls on Ethiopians in the diaspora and friends of Ethiopia to continue their #NoMore movement and protests, which somehow manages to fix the biased foreign media acknowledge atrocities being committed by the terrorist group- TPLF.

The Ministry stated that the past three weeks have been very impressive regarding the participation of Ethiopians, people of Ethiopian descent and friends of Ethiopia all over the world in showing solidarity with the people and Government of Ethiopia.

“The government of Ethiopia would like to say two things to the Ethiopian people abroad:1. Ethiopia thanks you to all of the initiatives you have been taking in support of the people and government of Ethiopia. 2. Ethiopia urges you to continue all the rallies and donations and to take part in the homecoming challenge for the upcoming Ethiopian Christmas,” said the Spokesperson at the Ministry of Foreign Affairs of Ethiopia Ambassador Dina Mufti said on Tuesday.

“The popular #NoMore Movements in almost all of the continents have echoed Ethiopia’s refusal to entertain any undue interference in its domestic affairs. The movement openly asked the mainstream media to stop fabricating news and disseminating unsubstantiated stories regarding Ethiopia, in particular the coverage on the conflict in the northern part of the country,” he said.

According to the Ministry, the movement also stripped of the hypocrisy of the mainstream media since none of them were willing to cover the demonstrations in different cities, although they were able to gather huge crowds.

“The NoMore rallies have resulted in changing the narratives on Ethiopia. Recent news stories on mainstream media have started to report, at least, the atrocities that the TPLF has committed in the Afar and Amhara regions. Besides holding peaceful demonstrations, the participation of Ethiopians in efforts to support affected people (such as IDPs) financially and in kind have remained impressive,” the Ministry said. 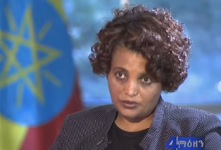