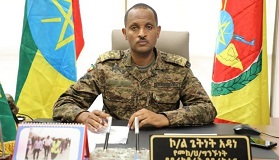 Ethiopian National Defense Force has debunked the propaganda the terrorist TPLF distributed as if it captured some places in Tigray region.

The disinformation disseminated by the terrorist group came after the troops of the national army were redeployed to several parts of the country from Tigray to ensure peace and security during the election process.

In a statement held today, ENDF Public Relations Director, Colonel Getnet Adane said the terrorist TPLF exploited the temporal redeployment of the army soldiers to exit from their hideouts and spread the false propaganda and misinformation.

According to the Director, the terrorist group made the false propaganda to gain international attention and ask them to let it start dialogue with the federal government. (FBC)