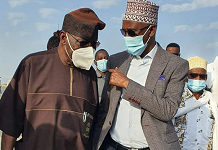 The former President of Nigeria, Olusegun Obasanjo, who is currently mandated by the African Union to mediate the Government of Ethiopia and the Tigray peoples Liberation Front (TPLF) today arrived Afar region of Ethiopia.

Upon arrival he is welcomed by president of Afar regional state Awol Arba, according to the information from Afar Regional State Communications Affairs Office. Official reports by the Government of Ethiopia show that TPLF forces are fighting Afar forces within different parts of Afar region.

Even though there has not been official statement from the Government of Ethiopia about the progress about behind the curtain discussions to end the civil war, TPLF leader Dr. Debretsion Gebremichael has been indicating that there are encouraging developments.

On the contrary, reports show that TPLF forces has been expanding their invasion in different areas in Afar and the bordering Amhara regions over the past few weeks.

President Obasanjo’s visit to Afar has come hours after the UN Deputy Secretary General Amina J. Mohammed, has visited the displaced people in the region this morning and discussed with President Awol Arba on how to provide humanitarian assistances to victims mainly women and children, among others. 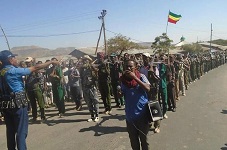