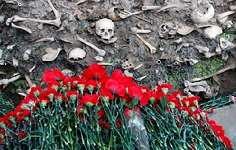 BY TESFA-ALEM TEKLE – Azerbaijanis on Wednesday marked the 103rd anniversary of the 1918 March genocide, committed by Armenian forces jointly with Bolsheviks against Azerbaijanis.

March 31 is commemorated in Azerbaijan as the Day of Genocide, in which tens of thousands of civilians lost their lives in Baku, as well as many other regions, including Shamakhi, Guba, Lenkaran, Salyan, Iravan, Zangezur, Garabagh and Nakhchivan in 1918. According to the Azerbaijani version of the events, in late March 1918, with the support of Bolshevik leaders of the Baku Council, the armed formations of the Armenian nationalist “Dashnaktsutyun” Party, led by Stepan Shaumyan, carried out mass killings and pogroms of Azerbaijanis.

After the October Revolution in Russia in 1917, the Bolsheviks seized power in Baku and viewed the Armenian nationalist party of Dashnaksutyun as an ally to capitalize the situation on the ground. Leader of the Russian Bolsheviks Vladimir Lenin appointed ethnic Armenian Stephan Shaumyan Extraordinary Commissar of the Caucasus.

“At the beginning of tragic March events, the Baku Soviet and Dashnaksutyun Party, under the pretext of combating counter-revolutionary elements, set about the plan to liquidate Azerbaijanis throughout the Baku Province. By the acknowledgments of Stephan Shaumyan, 6000 armed soldiers of the Baku Soviet and 4000 armed men from Dashnaksutyun Party took part in the massacre of Azerbaijani civilians “said Dmitri Panin, chargés d’affaires of the Embassy of Azerbaijan to Ethiopia.

Genocide of the Azerbaijanis by the Dashnaks was not limited to Baku. Within a short period of time, Armenians committed massacres in Shamakhy, Guba, Irevan, Zengezur, Karabakh, Nakhchivan and Kars. As a result, more than 16,000 people were killed with utmost barbarity in the Guba province in the first five months of 1918; a total of 167 villages were destroyed, 35 of which do not exist to this day. Armenian forces also slaughtered local Jews in Guba.

“March massacres of 1918 were well prepared and ruthlessly implemented act by radical nationalist Armenians against Azerbaijanis on the grounds of racial discrimination and ethnic cleansing” said Azerbaijan’s Ministry of Foreign Affairs in a statement issued today.

According to the statement issued in connection with the Genocide day, the Government of the Azerbaijan Democratic Republic established in 1918 the Extraordinary Investigation Commission in order to investigate the serious crimes perpetrated by Armenians and has taken a number of measures to preserve the true facts revealed by the Commission in the memory of the people and to inform the world community about these atrocities.

“The Extraordinary Investigation Commission which was comprised of the best lawyers of that time representing different nationalities – Russians, Jewish, Polish, Georgians and even Armenians, based on the evidences launched criminal cases against 194 individuals accused of different crimes against the peaceful population; 24 individuals in Baku and about 100 individuals in Shamakhy had been arrested for perpetrated crimes”

However, this process had been suspended after the demise of the Azerbaijan Democratic Republic, a full investigation of the tragic events and its political-legal assessment had been prevented.

The Ministry’s statement further said that, even after more than a century has passed, Armenia has continued its policy of committing crimes against Azerbaijanis on ethnic grounds, keeping Nagorno-Karabakh and the surrounding seven regions under occupation nearly for three decades.

Mr. Dmitri Panin says the commemoration of the Day of Genocide of Azerbaijanis raises the awareness of the world community to the facts of the massacre and ethnic cleansing of Azerbaijanis in the past and present.

After gaining its independence in 1991, the Republic of Azerbaijan resumed political assessment of the genocide of March 1918 and has been determined to bring about justice.

Previously Azerbajian has urged the international community to do serious political and legal assessment of Armenia’s crimes against humanity.