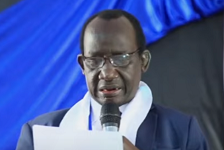 The Ministry of Mines and Petroleum said the country has secured $314 million from export of minerals during the first six months of the current budget year of the country started July 8, 2020.

This is indicated by Dr Kuang Tutlan, State Minister of Mines and Petroleum of Ethiopia, who spoke at Bulehora University symposium on the importance for maintaining peace and stability within the country in order to properly benefit from the mining industry, as the state broadcaster ETV reported.

Following the instability and political unrest across the country, mining export income of Ethiopia has been declining dropping around $100 million in one year. The improvement in peace and stability has contributed for the recovery of the sector, according to Dr. Kuang Tutlan. In his speech Dr Kuang Tutlan indicated that mining sector is one of the priority areas identified by the government.

Ethiopia reportedly has a huge reserves of gold, emerald, tantalum, and many varieties of gemstones. Most of the gold used to be produced by MIDROC Gold owned by the Ethio-Saudi Billionaire Sheikh Al Amoudi. meanwhile during the protests in the country, the company was forced to cease its operations. Next to MIDROC tens of thousands of artisan miners have also been major gold producers in Ethiopia.