She reflected on the sessions organized on the sidelines of the UN General Assembly (UNGA) in New York. Key among these was a high-level side-event jointly organized by the ECA, GBCHealth and the Aliko Dangote Foundation, which deliberated on the preliminary findings from the ECA’s forthcoming, “Healthcare and Economic Growth in Africa” report, calling for greater African private sector involvement and investment in healthcare.

The preliminary report finds that neither government nor existing public-private partnerships are effective enough, and that existing PPPs disproportionately focus on a small number of countries. The preliminary report recommends a new model, one in which PPPs prioritize around the most significant disease burden and broaden their scope to benefit the health of the whole continent, which the ECA deems critical to driving long-term economic growth in Africa. The report will be launched in early 2019.

Ms. Songwe also addressed the African Leaders Roundtable on Identification for Development side event, which discussed the need to reach “the invisible billion and provide digital opportunities for all.” She noted that 542 million Africans, who currently live without identities. Many of them are young people.

Africa Open for Business
During a side event titled: Africa Open for Business Forum which was aimed at showcasing the leadership of the African continent in addressing the 2030 Agenda for Sustainable Development and the African Agenda 2063, Ms. Songwe highlighted that business indices go beyond the index and that it is about sending a clear message that there are institutions that work.

“African countries have made up the top 5 countries consistently over the last few years, which means that countries have now realized that improving the business environment is essential to attracting the private sector,” she said. A lot of this progress, she noted, stems from the growth of SMEs, which contribute 64% of any GDP growth that happens in countries,” she added: “Small businesses will power the continent.”

Ms. Songwe indicated that there has been significant energy connectivity across the continent over the last 10 years. “We have gone from 700 million people without access to energy to 520 million people. Furthermore, she said, ten or more countries have 70% access to energy. We still have major challenges but we are making a dent. She highlighted Kenya, Mauritania and Senegal as exemplary in their efforts to improve their environments to support investment in energy.

In addition, she stated, “Africa has the highest numbers of ports being built and that learning from other regions, there is no doubt that we are open for business.” However, she said, Capital markets are needed to finance investments and that 22 countries have issued sovereign bonds in this regard. Financing development initiatives will also require supporting pension funds for long-term investments on the continent.

The side event was organised by the African Renaissance and Diaspora Network (ARDN), the UN Senior Africans Group, the African Union Commission, the Permanent Mission of the Federal Republic of Nigeria to the United Nations, in collaboration with the ECA the United Nations Sustainable Development Solutions Network (SDSN) and the Global Partnerships Forum (GPF), with support from the United Nations Department of Public Information.

Illicit Financial Flows
At a high-level side event on how inclusive and sustainable industrial development can support the implementation of the African Continental Free Trade Area (AfCFTA) agreement, Ms. Songwe stressed, “if the AfCFTA is to catalyze Africa’s industrialization through integrated markets then bridging infrastructure gaps and digitalizing economies across the continent is critical.”

The meeting also launched an IDDA III Champions initiative at which Ms. Songwe presented a silver plate to Daniel Kablan Duncan, Vice-President of Cote d’Ivoire as a token of appreciation for his work in promoting industrial development. A number of heads of state agreed to become IDDA III Champions, with a view to actively promote the role of inclusive and sustainable industrial development within the IDDA III framework and to increase awareness of this important initiative at the national, regional and global level.

All speakers agreed that for the implementation of the AfCTFA to be successful it would necessarily require further enhanced and concerted efforts by all international and national stakeholders – especially through innovative global partnerships on a multilateral level.

Ms. Songwe further participated in another side event on Illicit Financial Flows organized by the governments of Nigeria and Norway. She discussed ECA’s work on advocacy, base erosion, price shifting and institutional support.

She informed the meeting that ECA is working to get more countries engaged and signed up to global tax transparency and exchange initiatives. “Only then, can we as Africa begin to talk credibly about going after our resources,” she said.

Strengthening Partnerships
While in New York, Ms. Songwe also held a number of bilateral meetings aimed at fostering strong partnerships between the ECA and partners in the area of digital identification. She noted that 95% percent of all transactions in Africa are cash based. Leveraging the AfCFTA will require robust digital ID and payment systems.

Ms. Songwe met with Nandan Nilekani, co-founder of Infosys and discussed Africa’s digital identity and his participation in ECA’s Advisory Board on Digital Identity. Further, she met with the CEO of General Atlantic, Bill Ford, to discuss how their global experience could inform Africa’s design.

In a meeting with the Italian parliamentary delegation, she discussed ECA’s strategic priority areas, investment opportunities in Africa and strengthening Italy-Africa partnership. She informed them of the AfCFTA, ECA’s work on migration, Africa’s regulatory framework for digital identity, as well as transboundary solutions to deepen integration.

“Africa is the next frontier for investments. But we just need to ensure that the governance of our institutions measures up. Africa and Italy can be equal partners,” she said.

Ms. Songwe also joined Zain Verjee and Isha Sesay, former CNN journalists, in support of their new women’s summit venture and the launch of ‘Rouse’ – a story-telling platform that aims to amplify the voices of women on the African Continent. The meeting was held in Africa House, New York. 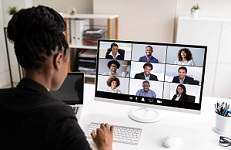