This is indicated today (March 24, 2010) during the launching of annual Ethiopian economic report published by EEA.
“The energy policy which was adopted in 1994 is inadequate to address the increasingly complex challenges and the unprecedented energy demand growth of the economy,” says Mengistu Tefera, who participated in depth analysis of Ethiopian energy sector research entitled, ‘Development, Prospects and Challenges of the Energy Sector in Ethiopia’.

Ethiopia’s demand for electricity and petroleum fuels will grow at 11.6 percent and 9.3 percent per year, respectively.

“The demand growth will have serious economic, social and environmental implications and repercussions (the depletion of forest resources will have adverse impacts on fuel supply, soil and water),” the report indicated After the recently inaugurated Gibe II Hydroelectric Power Station interrupted generating power a month ago due to geological problem, EEPCo has started power rationing.

Speaking about the current energy crises of the country at the Parliament last week, Prime Minister Meles Zenawi indicated that the problem will be solved in the coming three weeks.

The report, which for the first time attempted to incorporate all types of Ethiopia’s energy sources (hydropower, petroleum, biomass and renewable energy sources), listed several measures that should be considered by policy makers of the country in order to solve the burning power issue.

“In order to maximize national benefits, policy focus on hydropower needs to be sustained with multiple purpose use for regulated water downstream for power generation, sugar plantations and large-scale farms,” the report advised the government.

“In addition, government has to allow the private investor to be engaged actively in energy generation. The current sole power supplier of the country, the Ethiopian Electric Power Corporation (EEPCo) needs to be efficient as any other profit making private company to serve its customers,” Mengistu said.

In order to reduce the oil import bill of the country, the researchers advised the need to use the natural gas the country has and bio-fuel as transport fuels along with enhancing the ongoing oil and gas exploration.

With regards to biomass energy, on which the majority of Ethiopian population is dependent, the report advised to government to undertake serious review of the current situation with a view to sustain biomass fuel supply.

Reforestation programs should also be strengthened through incentive packages to encourage private sector involvement, according to the report.

The economists also recommended that the country needs to inject wind turbines, geothermal and coal generation units into its system to improve its power generation capacity, which currently highly dependent on hydro-power.

“High upfront cost, lack of market infrastructure and after sales maintenance and absence of promotion strategy are the major barriers for dissemination of renewable energy technology in Ethiopia,” said Mekonnen Kassa, who also engaged in the research.

To solve the problems related to renewable energy, the report advised policy makers’ the need for formulating and properly implementing a long-term plan and the introduction innovative financing mechanisms.

The Universal Electric Access Program (UEAP) of the country is not clearly defined to address the problem of electricity access in the rural areas as planned, according to the report.

“UEAP remains undefined as to how close the electricity supply infrastructure would get to rural homes. Moreover, problem of actual connectivity of rural homes has yet to be addressed,” the report stated. 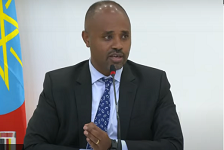