Commenting on the agreement Gulf Air Deputy Chief Executive Officer, Captain Waleed Abdulhameed Al Alawi, said: “ST Aerospace has demonstrated that it is the right partner for Gulf Air as we drive forward with our fleet renewal programme in preparation to welcome our new aircraft which commence delivery in the second quarter of 2018.”

“We are happy to play a role in Gulf Air’s fleet renewal plan, which will see its fleet of 787-9 expanding to 10 aircraft in the coming years. This multi-year component support contract that Gulf Air has awarded us speaks of the value we can create for, and deliver to, our customers through our hallmark Component MBH™ programme,” said Lim Serh Ghee, President, ST Aerospace.

ST Aerospace’s MBH™ programme, renowned for its flexibility and high level of customisation, is well established and popular among its global customers.  For a fixed rate per hour, the airlines select a range of support services and pay a corresponding flight per hour rate, which is pre-determined. In this way, operators are able to keep operating costs low and also minimise fixed asset inventory holdings in terms of spares or maintenance equipment.

Today, ST Aerospace provides integrated component support for a fleet of close to 600 aircraft on the MBH™ basis, for over 20 aircraft operators in Asia Pacific, Europe and the Middle East.

Gulf Air is the national carrier of the Kingdom of Bahrain. Headquartered in Muharraq, the airline operates scheduled services to 42 destinations in 25 countries.

This contract is not expected to have any material impact on the consolidated net tangible assets per share and earnings per share of ST Engineering for the current financial year.

The airline operates double daily flights or more to 10 regional cities, in addition to select destinations in the Indian Subcontinent and Europe, from its hub at Bahrain International Airport. Gulf Air currently serves all its destinations with a combination wide and narrow body fleet totalling 28 modern aircraft with orders for 39 new Boeing and Airbus aircraft due for delivery commencing in early 2018. The modern fleet will herald a new era for Gulf Air as it continues to enhance its product and service offering. Renowned for its traditional Arabian hospitality, evidenced by the airline’s signature family and business friendly products, Gulf Air is committed to being an industry leader and developing products and services that reflect the evolving needs and aspirations of its passengers. 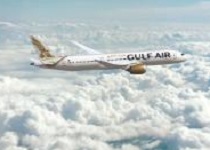