Ethiopia today lost its former President Dr. Negasso Gidada in Germany where he was getting medical treatment, the state broadcaster said.

Born in Dembidolo area of Oromia Region 75 years ago, Dr. Negasso has served Ethiopia for 7 years before resigning disagreeing with the ruling party line. Dr. Negasso served as President from 1995 until 2001. After resignation he joined the opposition political party Andinet. Dr. Negasso was a father of two children.


“It is with deep regrets that we share the passing of former Federal Democratic Republic of Ethiopia President, Dr. Negasso Gidada. PM Abiy Ahmed extends his condolences to the people of Ethiopia and his family. A national committee to oversee the funeral arrangements is being established & will share details,” the Office of Prime Minister twitted.

After resigning from the ruling party and joined the opposition, Dr. Negasso was illegally denied of the basic benefits of a president such as, housing, other benefits.

Dr negasso who studied in Europe and married to a German, was an active member of the Oromo Liberation Front (OLF), according to his Wikipedia profile.  Negasso had been Minister of Information in the Transitional Government of Ethiopia and Central Committee member of the Oromo People’s Democratic Organisation (OPDO) now called Oromo Democratic Party (ODP) led by Prime Minister Abiy Ahmed.  He became president on 22 August 1995. He left office when his term expired on 8 October 2001. 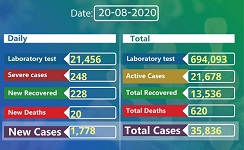