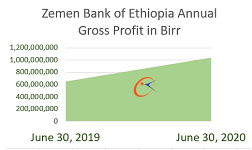 Compared with the preceding year, the annual gross profit of Zemen Bank Share Company, one of the 16 private banks in Ethiopia, has surpassed one billion Birr for the financial year concluded June 30, 2020. The Bank’s gross profit has increased to 1.04 billion Birr growing by 388 million Birr (59 percent).

The net profit of the Bank for the year has reached 739 million Birr with earning per share of 46 percent. This is as indicated at the annual report of the Bank presented at the shareholders meeting held in Addis Ababa last week.

The Bank has mobilized a total savings of 2.8 billion Birr during the year, which is 24 percent more than the previous financial year. Zemen’s loans and advances for the year has also reached 9.7 billion Birr showing an increase of 28 percent from the preceding year.

Of the total loans the Bank has provided in the year, the manufacturing sector has received almost a quarter of the total – 24.6 percent, followed by domestic trading 20 percent, hotel and tourism 14.4 percent, and 13 percent for export businesses and agribusinesses.

During the annual meeting the shareholders have decided to incre4ase the capital of Zemen Bank by 150 percent to 5 billion Birr. According to the report of the National Bank of Ethiopia, the state agency which regulates the financial system of the country, the total capital of the banking industry increased by 18.4 percent and reached Birr 101.5 billion by the end of June 2019. As most of the private banks are increasing their capital during their annual meetings over the past few weeks, the total capital of the banks in Ethiopia is estimated to at least increase by 50 percent.

In addition over a dozen new banks are also expected to enter the financial sector of the country in 2021 and 2022 as most have already sold their shares to the public. Most of the new banks coming into the market are established by Ethiopians in the Diaspora, while the remaining are full-fledged Islamic banks, which the country allowed by law for the first time. Ethiopian with foreign passports are also allowed to own banks in Ethiopia for the first time after the government revised its regulations. Banking, insurance sectors in Ethiopia, among others are still not opened for foreign investors.