Compared with the previous financial year annual gross profit of Hibret Bank, one of the sixteen active private banks in Ethiopia, has increased by over 15 percent to 1.13 billion Birr during the year concluded June 30, 2020.

This is indicated this week at the annual shareholders meeting held in the capital Addis Ababa. “…The balance of net profit available for distribution to shareholders came to Birr 615.12 million against a comparable balance of Birr 389.17 million the previous year,” said Zafu Eyesuswork Zafu, Board chairperson of Hibret Bank Share Company in his message to the shareholders.

He also noted that the Bank’s share capital had grown from Birr 2,256,565,000 on 30 June 2019 to Birr 3,182,165,000 on 30 June 2020, recording a respectable increase of 41 percent during the year. “On the basis of the foregoing results, the Board of Directors recommends declaration of a pro rata dividend of 20.51 percent on fully paid shares for the year ended 30 June 2020. In the course of the year, the construction of the Bank’s Head Quarters had reached its final stage of completion and was expected to be fully ready for occupancy during the first half of the coming year,” he said.

Hibret Bank’s retail business continued to grow steadily. Aggregate deposits reached Birr 34.7 billion showing an increase of 19.45 percent over that of the previous year. “Considered as one of its marked successes was the Bank’s ability to mobilize Birr 1.23 billion from Interest Free Banking Services, which itself had recorded a significant growth of 40.17 percent over what it was the previous year. The total outstanding balance of loans and advances including interest free finance, grew by Birr 5.48 billion or 25.83% to reach Birr 26.71 billion, up from Birr 21.61 billion the year before,” he noted.

The annual report so the bank shows that by the end of June 30, 2020 the total number of jobs created by Hibret bank was 6,536. In addition to sixteen private banks two state banks are operational in Ethiopia, while over a dozen private banks are under-formation. The interest to establish new banks has come following the new regulation by the National bank of Ethiopia, which allowed Ethiopians holding other countries’ passports to own banks, and introduction of full fledged Islamic banks in the country. 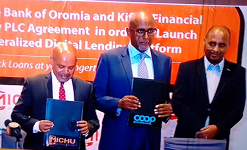 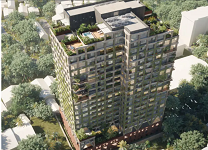