Compared to the previous financial year, the annual income of Enat Bank, one of the private banks in Ethiopia, has increased by 233 million birr ($7.3 million at the current exchange rate) during the year ended June 30, 2019.

Promoted and established mainly by renowned businesswomen and women engaged in different professions including the current Ethiopia’s Supreme Court President Meaza Ashenafi, Enat (meaning mother in Amharic language) is one of the youngest banks in Ethiopia.

Out of its 540 total employees working in 45 branches across the country, 60 percent are women. Under its Enat Women Business Solution program, the Bank has been providing loan to small businesses run by women. So far 714 women who own small and medium businesses across Ethiopia have managed to access loan and develop their business, according to the annual report.

“We are launching digital banking service in the new year. The implementation of mobile banking, wallet and Internet banking is a turnaround in Enat Bank’s payment space. Such breakthrough will upscale our ability to expand and penetrate into new markets,” said Wondwossen Teshome, President of Enat Bank Share Company, in his message to the shareholders. 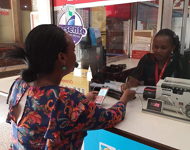