The Government of Ethiopia has collected a total of 109.2 billion birr (about $3.5 billion at the current exchange rate) tax during the first five months the current budget year.

The Ministry of Revenue of Ethiopia has said it has collected 19.2 billion birr (about $617 million at the prevailing exchange rate) last month (November 2019).

The Ministry said it has achieved 104% of its tax collection target for the month. It is indicated that public awareness raising national campaigns of the Ministry has contributed to the successful achievement of its target.

“The hard work of employees of the Ministry as well as the compliance of the business community has contributed a lot for the success,” the Ministry said, in its statement published on its official FB page half an hour ago.

It is stated that the Ministry has been meeting its monthly targets over the past five months of Ethiopia’s current budget year, which began July, 8, 2019. This shows that the government will meet its target of collecting revenue of 248 billion birr (close to $8 billion at current exchange rate) by the end of the year, according to the Ministry. Out of this 40% revenue is expected to be generated from customs taxes.

To ease tax collection process, currently the Ministry of Revenue of Ethiopia is working to make some 10,000 tax payers pay their taxes using e-filing (reporting) and e-payment system without going to tax offices. 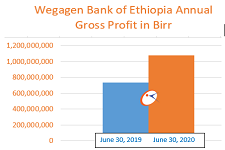