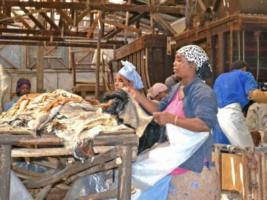 BY ANDUALEM SISAY GESSESSE – Kasim Yirga was only 19 when he was first recruited by Modjo Tannery some 30 years ago. Today, earning 1,000 birr per month — the equivalent to around $55 USD — he works in the tannery on a machine that removes hair and fats from the skin after soaking. Before Ethiopian currency gradually lost its purchasing power, he managed to get married and have two children who are now 22 and 17 years old.

“I remember that a loaf of bread, which we buy today for one birr and 20 cents, was sold only for 0.10 cents when I got my first child,” says Kasim, exasperated with the ever-increasing cost of living in the country. He glances at his colleague who is busy working on the machine next to his. “Thanks to God, the children are now grown and we are also still surviving,” he says.

Located some 80 kilometres from Ethiopia’s capital Addis Ababa, Modjo River is a water source for the country’s many inhabitants. News reports and several studies indicate it is also one of the most polluted rivers in the country. The river contains polluted agro chemicals and industrial waste containing high levels of chromium, phosphates, nitrates and other toxic chemicals.

Today, 11 tanneries are operating around Modjo River along with other industries and flower farms, which also emit toxic wastewater into the river.

Named after the river, Modjo Tannery is one of the industries that has been draining its toxic wastewater into the river for almost 50 years. It was previously owned by the state before the government privatized it six years ago. With the capacity of soaking 8,000 pieces of animal skins and 400 cows hides per day, the tannery exports 70 to 80 per cent of its finished leather to Europe and Asia. During the tanning process it releases 400 cubic meters of wastewater every day, according to Redman Bedada, manager of the tannery.

“Health problems like skin blisters, diarrhoea, gastroenteritis, urinary tract infections and liver diseases affect both adults and children who use the water for domestic purposes,” he writes. “Animals too have not been spared as those that drink from the river have suffered loss of hair and sometimes become crippled and even die.”

“With this level of pollution, Modjo River in the near future will be an environmental catastrophe,” he writes.

One of the most toxic chemicals used by tanneries to remove hairs and unnecessary fats from the skins is chromium. According to Alemnu’s research, ingesting above recommended levels over long periods of time can result in adverse health effects including gastrointestinal irritation, stomach ulcers, respiratory tract infection, severe cough, fever and loss of eyesight.

A report from the United Nations Industrial Development Organization, which promotes industrial development in smaller countries, states that chromium can replace other metals in biological systems with toxic effects, which can lead to serious ecological and health problems in humans and animals.

Ethiopia has a total of 27 tanneries in different parts of the country with an additional four under construction.

According to an Ethiopian leather trade organization study, the country earned $112 million USD from the export of finished leather products from 2011 to 2012  —around one thirtieth of its total export earnings. The government hopes to earn $500 million USD annually from the industry by 2015.

In addition to export earnings, ranging from the self-employed small cottage shoemakers to big tanneries and leather products manufacturing, the leather sector in Ethiopia has also created jobs for tens of thousands of people.

According to Mekibib Dawit, team leader for an eastern African biosciences development program, Modjo Tannery is introducing a $500 million USD  biological waste treatment pilot project. It is expected to be fully operational in the next six months and reduce the amount of the toxic wastewater coming from the tannery.

The biological toxic wastewater treatment plant, which is now under construction, is expected to treat some 60 to 80 cubic meters of toxic wastewater every day — about one sixth of the total the factory releases. It also aims to reuse the treated water as well as enable the tannery to produce 60 cubic meters of bio-fuel. Bio-fuel is a clean, easily controlled source of renewable energy from organic waste materials, replacing firewood or fossil fuels.

The pilot project is being implemented under the Bio-Innovate Program of East Africa, in collaboration with the Addis Ababa University of Ethiopia.

The project aims to avoid the toxicity of chromium and significantly reduce pollutants disposed from the tannery to the Modjo River.

A system will be installed at Modjo Tannery to separate chromium-rich waste matter from the rest of tannery dirt in order to deliver chromium-free sewage for biogas production.

The pilot project in the tannery can only reduce, not eliminate, the chemical levels that will be released into the environment. But the main challenge for the project’s researchers will be figuring out how to use the chromium-rich dirt accumulated after biological treatment.

“To replicate such technology in another tannery, it needs at least an investment of between $100,000 and $200,000 USD ” says Dawit. “The cost is lower than the pilot because the research cost will be deducted, some imported materials can be produced locally, and the knowhow will be there.”

The law also makes it mandatory for new tanneries to have at least a main chemical wastewater treatment plant during the start of operation.

Both the main and secondary wastewater treatment system costs are almost equal. But the difference is that through the main system, some of the waste materials treated will be used for generating bio-fuel, which the tanneries can use as an additional source of power.

“As an environmentalist, I totally don’t recommend a chemical treatment simply because you just treat something and add additional problems,” says Seyoum Leta, Bio-Innovate Program Manager.

“By doing so you increase a burden on the downstream river,” he says. “In addition, you need to buy those chemicals every time from abroad using scarce hard currency of the country.”

Now the question is whether the country’s more than two dozen tanneries can afford to install such biotechnology or get external funding such as with Modjo Tannery.

“Getting foreign funding is unlikely,” says Peter Bloch, an agricultural and business expert engaged in evaluating the pilot project. “What we are thinking is that we share the know-how from this pilot to other tanneries in the country and perhaps technically assist them to replicate it as well.”

According to Leta, only four of the eleven tanneries in the country are using the main chemical toxic wastewater treatment systems.

“It is difficult and impossible for the factories to invest additional hundreds of thousands of dollars to install chemical or biotechnology water treatment plants,” says Redman Bedada, who manages the Modjo Tannery Share Company.

He says the factories need financial support to use proper water treatment technology to filter the wastewater from the tanneries. For some factories, this includes relocation costs of the tanneries from residential to industrial areas.

The ten year deadline set by the government for the factories will be over this year. Now, the question is whether the government will close these tanneries or come up with a better plan that helps the tanneries get financing for proper toxic wastewater treatment systems. The environment, the safety of the people and their cattle living downstream of the river depend on it.

“I think the tanneries will face either closure or penalty from the government,” Bedada says.

Now the main challenge for the country is to balance the economic benefits from the leather sector – which includes allowing tens of thousands of citizens such as Kasim to continue feeding their families – with the catastrophic effects of the tanneries on human lives and the environment.