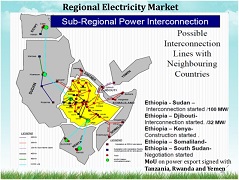 To commence the filling of water into the Great Ethiopian Reconnaissance Dam (GERD) in the coming July, the Government of Ethiopia said it is set to commence cutting trees and bushes found on 1,000 hectares of land.

The Job Creation and Enterprises Development Agency of Benishangul Gumz Region of Ethiopia indicated that clearing starts today to prepare the area for water filling. Director of the Agency Mr. Beshir Abdurahim on Friday told the state daily Amharic newspaper , Addis Zemen, that the government will spend 29,000 birr (about $850) per one hectare for clearing the forest and bushes.

He stated that clearing of the bushes will create jobs for over 2,000 unemployed youth found in the Benishangul Gumz. The youth through their 70 associations have signed agreement to complete the clearing of the forest and forest within 45 days, according to Mr. Beshir, who stated that the youth in the region have not been able to benefit from the previous bush clearing activities around GERD.

The clearing activities include cutting the trees into pieces, and transporting the pieces to other places where it will be converted into charcoal as well as making the area flat so that it will be able to hold water.

Located in Western Ethiopia of Benishangul Gumz Region at some 20 kilometres distance from Sudan border, GERD’s artificial lake has the capacity to hold 74 billion cubic meters of water.
Some 73 percent of the overall construction of GERD is completed, according to Engineer Kifle Horo, Project Manager of the GERD, who also stated that 87% of civil works and 26% of the metal works is carried out.

Enormous activities have been carried out to commence impounding in the coming rainy season that aims to launch generation at the coming year, according to Ethiopian Electric Power, which administers 18 power plants generating a total of 4244 mega watt electricity nationwide.

recently the government of Egypt has been urging the international community including the Arab League and the United Nations to stop Ethiopia from starting filling water the GERD in the coming July. Egypt has been expressing its concern that GERD will reduce the “historical” volume of water it used to get from the Nile River.

On the contrary Ethiopia, which contributes 86 percent of the water to the Nile River, has been arguing that it has natural right to use its natural resources with out causing severe harm to the down stream countries, Egypt and Sudan, which which have been using the water alone as per the 1958 agreement made between the two countries.

When GERD will be fully operation, it is expected to generate over 5,000 megawatts of electricity. In addition to lighting some of the 56 percent of Ethiopian homes now in darkness, Ethiopia also eyes to increase its revenue from selling energy to neighboring countries inline with Agenda 2063 of the African Union and and UN supported promotion of renewable energy to speedup economic integration of African continent.

Currently the country is earning some $70 million on average per year from selling electricity to Sudan and Djibouti. It also aims to bring aboard new energy clients such as Somali Land, Kenya, Tanzania and South Sudan.