A photographic exhibition, which shows the 13 new universities built in Ethiopia over the past few years, opens at Goethe Institute last night January 11, 2009.

The exhibition, which was primarily displayed in Germany from July 17 to September 6, 2009, shows the components of the University Capacity Building Program (UCBP) and Ethiopia’s history.

It will be open for visitors for two weeks and moves to German house for additional three weeks, according to the organizers.

“The reason we decided to display the exhibition is to show the rest of world what ambitious and interesting construction in the world has been done in Ethiopia,” said Stefan Helming, Director of GTZ IS Ethiopia, the agency which managed the construction of the 13 universities.

Ethiopian Minister of Education Demeke Mekonnen, on his part indicated that the construction of the universities manifests the strong relation of Germany and Ethiopia’s bilateral cooperation on education. This cooperation has been gaining momentum, especially after both countries signed the Engineering Capacity Building Program in 2004, according to the Minister.

The universities are built under UCBP’s capacity development and construction project fully funded by the Ethiopian government. “The university capacity building program involved Ethiopian companies and enabled them to develop their construction and management capacities,” states the press release dispatched during the exhibition.

“The program has also accomplished its task of capacity development in the local construction industry for future work in which 39 consulting companies, 90 contractors and more than 12,000 citizens have been enrolled in small and micro enterprises and developed their skills.” 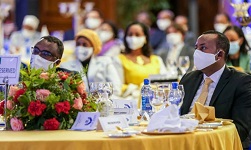