Founded sixty years ago, the UNECA has been engaged in assisting African countries to formulate relevant development policies and strategies in various sectors of the economy.

“..Prosperous Africa is within reach within our life time,” said Vera Songwe Executive Secretary of UNECA, speaking at the commemoration this morning in Addis Ababa.

“Africa coming together to trade is a clear determination of Africa’s economic independence. …Africa holds 70% of the world’s poor. To achieve the dream of prosperous Africa; we have the ideas, we have the resources. We must engage with institutions in Africa,” she said, indicating that achievements of ECA have been notable ranging from trade policy and climate debate to migration discussions.

The United Nations Development Program Administrator and Vice-chairman of the UN Sustainable Development Group, Achim Steiner on his part indicated that Africa remains a continent of many opportunities and challenges.

“…With its mineral wealth, youthful population and largely unexploited natural resources – the next frontier of development is certainly on this continent because in spite of opportunities, challenges abound,” he said.

He stated that the continent’s 60% of youth are unemployed and Africa has huge infrastructure deficit of up to $93 billion a year.

“…The UNDP celebrates with UNECA, our strategic partnerships in the region for sustainable economic development of the continent, for advancement of African continent and prosperity of all African people,” he said.

The United Nations – Africa Union Joint Framework on the implementation of the 2030 Agenda for Sustainable Development and the African Union’s Agenda 2063 was finalized in January 2018 and action plan adopted in June 2018. 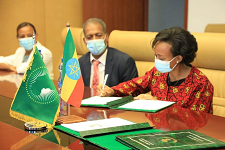