The multilingual versions of the second volume of Xi Jinping: The Governance of China was launched in London last Wednesday.

The book, unveiled during the ongoing London Book Fair, contains a collection of 99 articles, including Xi’s speeches, conversations, instructions and congratulatory messages, dated between August 2014 and September 2017.

The new book, published in Traditional Chinese characters, English, French, Spanish, German, Russian, Japanese, Arabic and Portuguese, was launched at a ceremony attended by some 300 political and business leaders, academics, and representatives of publishing agencies from 14 countries and regions.

Britain’s Prince Andrew, the Duke of York, said at the ceremony that the global launch of the book in London is a “milestone,” and it will hopefully “enlighten readers about where China is going and what it is thinking.”
“It takes a lifetime to understand China. And I am on that journey,” said Prince Andrew, adding that he awaits more volumes of the book to come.

China and Britain, as two major countries in the world, share great cooperative potential on cultural exchanges, innovation, business, and the promotion of globalization, he said.

Jiang Jianguo, minister of the State Council Information Office, said he believes that through the book, international readers will better understand that the Communist Party of China is a party that seeks to improve the well-being of the Chinese people, to realize the rejuvenation of the nation and to promote common development for the whole world.

Jiang said that China will push for quality development, vigorous innovation, deeper reform and opening up in a bid to further share opportunities and benefits with the rest of the world.

Liu Xiaoming, China’s ambassador to Britain, said that cultural exchanges between China and Britain have made important contributions to the development of bilateral relations.

The premiere of the book is a major event for China-Britain ties, and it is hoped that the two sides will take this opportunity to further strengthen cultural exchanges and mutual learning between civilizations so as to build the bilateral relations into a model of major-country relations featuring mutual respect, equality, mutual trust and win-win cooperation.

Martin Albrow, a renowned British sociologist, said the new book is a reinforcement of the first volume, which was published in 2014.

The new book is not only for Chinese readers, but for all those who care about the future of mankind, said Albrow.
Mario Monti, former Italian prime minister, said the book showcases the Chinese leader’s global vision and his insights into governance of China, which will prove inspiring for readers across the world. He also believed that the book helps dispel some of the misunderstanding and prejudice about a rising China.

The book also offers a perspective on how to tackle relations among European nations, how to participate in and push forward globalization and how to build a cooperative relationship with China, said Gonzalez. Enditem 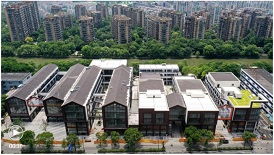 China to build Zhejiang into demonstration zone for common prosperity