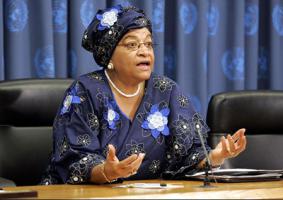 Liberia’s President, Ellen Johnson Sirleaf has saluted the African Capacity Building Foundation (ACBF) for the results it is achieving on capacity development initiatives across the continent.

The president also said that she will support the organization in its quest for resources to help African governments build, retain and use critical skills on which the continent’s sustainable development will depend.

President Sirleaf’s commitment to supporting capacity development efforts in Liberia and across Africa was made recently at the Presidential Mansion, Monrovia, during a working meeting with the Foundation’s Executive Secretary – Prof Emmanuel Nnadozie.

She also reviewed initiatives by the ACBF in Africa in general and in Liberia in particular in order to seek ways to strengthen the effectiveness of the programs. Mrs Sirleaf said she was particularly pleased with the coming to fruition of the Empowering Women in Agriculture (EWA) initiative for which serves as lead Champion.

In her view, the recent launch of the pilot project in Tanzania “is a sign of progress” and ACBF should do all that is necessary to ensure continuity of the initiative. Speaking to the press after presenting ACBF’s exact plans to support the Republic of Liberia’s development agenda and obtaining Liberia’s support to carry ACBF’s voice to funding organizations, Prof Nnadozie said “President Ellen Johnson Sirleaf’s exemplary leadership role in championing several African causes has been a motivating factor for our request that she helps to champion our global call for support to capacity development in Africa.

“As you may have read in our various reports, evidence abounds that the one crucial thing that may considerably delay Africa’s progress toward sustainable inclusive growth and development is the inadequacy of appropriate skills in very important sectors of science, technology, engineering and mathematics – STEM. Africa has a shortage of 4.3 million engineers and 1.6 million agricultural scientists/researchers to implement its development plans and the only way to realize this is to robustly build capacity in these areas as well as in managing structural changes,” he said.

“Supporting the work of the ACBF which has the unchallenged 26-year track record of having effectively and efficiently managed over 700 million dollars of capacity programs and grants retailing across Africa, will prove extremely important in times like these when Africa is trying to implement its development blueprint known as Agenda 2063 and the Sustainable Development Goals amidst serious capacity challenges” Prof Nnadozie argued.

Boima S. Kamara – and the Head of ACBF, the Minister was reassuring. “We will ensure you remain a viable entity that drives Africa in the direction of self-reliance, sustainable job creation and better quality of life for all Africans,” Minister Kamara told the ACBF’s Executive Secretary.

ACBF has to date invested around $1.4 million in the Republic of Liberia, particularly in support of LIMPAC’s human and institutional support, the phase of the program of which was concluded in 2012. The recent visit to Liberia by Prof Nnadozie has paved the way for a revamping of the Foundation’s support to LIMPAC and other programs to support Liberia’s efforts in reaching its own development aspirations especially though developing the critical capacities.