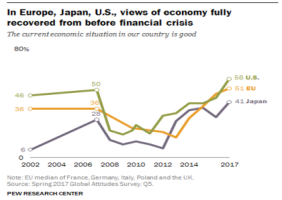 The Dutch, Germans, Swedes and Indians see their national economies in the most positive light. While global publics are increasingly upbeat about economic conditions, the overall view of the economy is still in negative territory in many countries. Overall, a median of only 46% in the 32 nations surveyed this year say their current economy is doing well.

At the same time, many are concerned about the future: A median of just 41% believe that children in their country today will grow up to be better off financially than their parents. The most pessimistic about prospects for the next generation are the French, Japanese and Greeks.

Across five large European economies, Japan, and the United States, public assessment of national economic conditions is now more positive than it was in 2007, immediately before the global financial crisis.

Nearly six-in-ten Americans (58%) believe the economic situation in the U.S. is good. This is the most upbeat assessment of U.S. economic conditions and only the second time that half or more of those surveyed have given the economy a positive rating since 2007.

The U.S. economy has experienced roughly 80 months of job growth and the unemployment rate was only 4.9% in 2016. In spring 2009, when the jobless rate was 9.3%, just 17% thought economic conditions were good. In 2007, before the economic downturn, 50% said conditions were favorable.

In France, Germany, Italy, Poland and the United Kingdom, a median of 51% now give their economy a positive grade. This comes in the wake of an average 1.7% growth in 2016 in the five European Union countries surveyed and an unemployment rate of 7.4%. The public’s view of the economy is up from a low of 15% across the five EU nations in 2013, when their economies grew at an annual average of only 0.6% and joblessness stood at 9.0%. In 2007, a median of 36% in those countries said their economic situation was good.

In Japan, 41% now voice the view that their economy is doing well. The Japanese economy grew by 0.8% in 2016, with unemployment at 3.1%. In 2012, despite economic growth at 1.7%, only 7% held the view that their economy was good – possibly because the unemployed accounted for 4.4% of the labor force. In 2007, before the financial crisis, 28% of Japanese said economic conditions were good.

These are among the key findings of a new Pew Research Center survey conducted among 34,788 respondents in 32 countries from Feb. 16 to April 28, 2017.