The two-day event kicks off today with focus on the priorities and challenges of establishing a sustainable blue economy and its contribution to the implementation of the 2030 Agenda for Sustainable Development, including maritime safety and security.

Participants will explore the role of various stakeholders, including national and local governments, private sector, civil society, regional and sub-regional groups as well as domestic and international financial institutions in investing and formulating sustainable ways of exploiting Blue Economy.

The Economic Commission for Africa (ECA) and its partners are organizing a number of side events on the margins of this high-level conference where over 4000 participants are expected from across the globe.

“We are co-hosting a side event to sensitize stakeholders on the importance of the Lamu Port, South Sudan, Ethiopia Transport Corridor (LAPSSET), and its important role on the blue economy,” said Adeyinka Adeyemi, Head of Regional Integration and Infrastructure Cluster at the ECA.

ECA and the African Union Commission (AUC) will also co-organize a side event “to, among other things, enhance advocacy around the blue economy and define a clear work programme for 2019 with regard to resource mobilization and capacity building for gender-specific projects within the Blue Economy,” explained Martin Ndende, ECA Blue Economy Coordinator.

Mr. Ndende also noted that the Commission will co-host another event with the International Maritime Organization (IMO) to examine how states can leverage the blue economy in their national plans and policies to strengthen implementation of the 2030 Agenda, African Union Agenda 2063, the 2050 Africa Integrated Maritime Strategy and related intergovernmental agreements, promote synergies, and address negative tradeoffs.

The potential for the development of the Blue Economy in Africa is linked with the efficient implementation of the AfCFTA, as pointed out by Stephen Karingi, Director of ECA’s Regional Integration and Trade Division.

“There is a clear linkage and interdependence between the Blue Economy and the AfCFTA, as trade is essential to fostering the development of Africa’s economy. The Blue economy has the potential to generate wealth in key sectors, such as mining, transports, fisheries to name a few.”

Mr. Karingi noted that the side events will enhance visibility of the work done by ECA and its partners on Blue Economy and other related fields.

ECA has been requested to provide technical assistance by way of proposals for key policy reforms to the Kenyan Government on Blue Economy, and an issues paper on challenges for the development of the Blue Economy in Africa.

The Commission’s executive secretary, Vera Songwe, is amongst the dignitaries who will be delivering remarks at the official opening of the two-day conference in Nairobi. 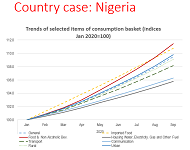