The Bank also offered Chad the possibility of raising additional financing through its private-sector window for commercially viable private sector projects or public-private partnerships. The Bank will help strengthen Chad’s institutional capacity and the development of bankable projects.

The pledge was made during the international roundtable in Paris on September 6-8, 2017, which was organized by Chad to seek funding for its 2017-2021 National Development Plan, which it adopted in July 2017.

Chad is one of the AfDB’s 54 member states. As a partner of choice, the AfDB Group had a large presence at the roundtable. Its President, Akinwumi Adesina, was represented in Paris by Khaled Sherif, Vice-President for Regional Development and Integration; the Vice-President for Vice-President, Power, Energy, Climate and Green Growth, Amadou Hott; and the Director General for the Central Africa Region, Ousmane Doré.

The roundtable was organized with the backing of the Chadian head of state, Idriss Déby Itno, who attended along with members of the Chadian government and nearly 600 other heads of state, decision makers, and leading figures, including the French Prime Minister, Édouard Philippe, the President of the Islamic Republic of Mauritania, Mohamed Ould Abdel Aziz, the President of the African Union Commission, Moussa Faki Mahamat, and representatives of development partners and private investors.

The event in Paris was considered a resounding success, and Chad succeeded in raising US $12.9 billion (approximately 7,120 billion CFA francs) in funding pledges from both public and private international donors.

The AfDB was one of the largest donors at the meeting, providing US $540 million in capital funds for 2017-2021, which covers the period of the National Development Plan (NDP).

“The goals of Chad’s NDP are completely aligned with the vision of the AfDB Group”, was the message Amadou Hott shared with those present on behalf of Bank Group President Akinwumi Adesina. Launched as part of “Vision 2030 – the Chad we want”, this ambitious plan mirrors the Bank’s priorities and is designed to speed up development in the 54 member states: a direct reflection of the High 5s. It focuses especially on agriculture (“Feed Africa”) and energy (“Light up and Power Africa”), as well as economic diversification, strengthening the private sector, and job creation.

“This is why the African Development Bank intends to continue supporting efforts in Chad, with projects and programs that reflect this shared vision of development, especially in the energy and agro-industry sectors, while focusing on young people,” declared Adesina.

The Bank has played an active role in Chad for more than 30 years and currently has a portfolio of 13 operations, representing nearly 250 million US dollars in net pledges. Three sectors account for nearly 90% of the Bank’s investment: transport, agriculture and natural resources, and governance. In July 2017, the Bank confirmed that it would help to fund the 32 megawatt solar plant to be built in Djermaya, about 30 km from N’Djamena, as well as an electricity network connecting Chad and Cameroon. 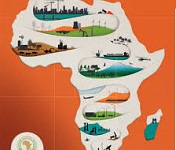