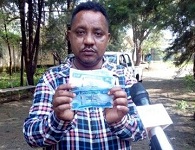 The two individuals caught in Bahir Dar city with 200 and 100 fake currency notes of Ethiopian Birr are arrested after a court found them guilty, according to Amhara Mass Media Agency. The report didn’t mentioned the source of the fake currency notes – if it was being printed locally or smuggled into the country. The Government of Ethiopia has reportedly spent some 3.7 billion Birr (about $101 million) for printing the new currencies, which cumulatively have some 280 billion Birr total value.

The distribution of fake currencies with side by side with the new notes before even the country completes the circulation of the new notes, is believed to have a severe impact to the economy by contributing to high inflation and organized crimes such as, money laundering, which forced the Administration of Prime Minister Abiy Ahmed to replace the old currency notes with new ones a few weeks ago.

It was a few weeks ago that Ethiopia has changed its currency notes by introducing the biggest 200 Birr note for the first time. If one is found deliberately circulating fake currencies, he/she could face up to 15 years of imprisonment along with other penalties such as losing all of his/her wealth, according to Ethiopian criminal law.