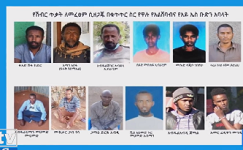 The 14 suspects were arrested in collaboration with the federal police, Addis Ababa Police, Amhara and Somali regions security agencies. The individuals were planning to execute terrorist attack using the current operation of Ethiopian Army to restore law and order in Tigray Region, according to the statement of ENISS reported by the state broadcaster – ETV on Saturday.

Led by Abdulabdi Jemal, nicknamed Abdulkadir, who came from Somalia was leading the team receiving orders from Al Shabaab member living in Somalia named Jafar (Kure). He is captured along with six individuals he recruited before undertaking attack in Ethiopia.

In addition, the statement also stated seven other individuals who took assignment from ISS to execute terrorist attack in Ethiopia are also captured along with various materials planned to be used for their mission. The new recruits of the terrorist group were also set to travel to Somalia for training on how to successfully conduct terrorist attacks, according to ETV report.